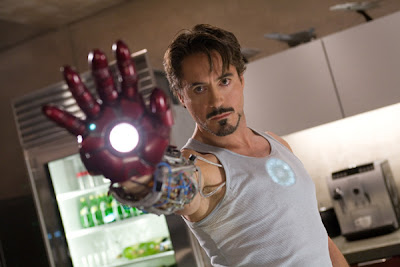 So I was watching Iron Man on DVD again the other night with the lad. As anyone knows, super heroes really aren’t my thing (as this post & subsequent comments thread illustrates), but even I can’t argue with Iron Man: there’s some superb violence, a decent soupcon of humour, a fantastic soundtrack (AC/DC! Black Sabbath… Audioslave?! OK, I’ll let that one go) , some great CGI and best of all, Robert Downey Jr looks TOTALLY FIT in it. In short, it does exactly what it’s supposed to, kinda like Ronseal (okay, Pepper Potts is wet, but this is super hero land, we have to LET IT GO: even when super heroes ARE women, they’re still wet (Electra anyone???). Just take a DEEP BREATH grrrrlz, *there’s no place like home*).

There’s something truly American about super heroes. I’m aware of the various arguments re: “Americanising” the world via super heroes, but I don’t mean that. I also don’t mean it as a criticism either; the seemingly ceaseless can-do attitude (and lack of whining!) of our cousins has always been something I’ve admired a great deal. Put it this way: I just can’t imagine a British man waking up with an electromagnet in his chest and not only accepting it, but becoming a superhero that FLIES. An American fella though? WHY NOT.

It was with this in mind then, I asked Hub and Boy what the British equivalent of the super hero is. Their answer? 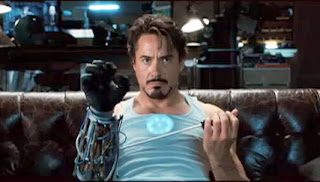 Seriously? To me, Dr. Who is NOT a super hero. A troubleshooter, yes; an academic, an observer, an intellectual, a problem-solver – defo. He’s clever, kind AND at times, cruel. Oh – and the real deal-breaker for me: he’s also an alien. For me, the super hero *has* to be human. Yes, we’ve had Superman – but at least he was RAISED human – and Hancock (shudder) . Yes, most of them are genetically modified in some way, usually via radiation – The Hulk, Spiderman, etc – but they’re still LIKE US. They still have NORMAL LIVES. Okay, Bruce Wayne and Tony Stark are MILLIONAIRES and have riches beyond our wildest dreams, but they still have the types of trauma we can relate to: they’re orphans; they can’t get close to people; all their women leave them, etc.

But Dr. Who doesn’t have a *normal life*: he doesn’t even live in a house, he lives in the Tardis. He travels space and time. He doesn’t have to have a *day job* and pretend he isn’t larger than life, he IS larger than life: everyone knows him, he is THE DOCTOR. He can whisk women off their feet and make them fall in love with him *like that*, he doesn’t have to try – and they will travel squillions of light years with him, no questions asked. Nice! And what’s more, he ISN’T there every single time the world *nearly* ends – he gets days or even weeks off at a time, thanks to the likes of Torchwood being on standby.

But last, by no means least: he’s a Geek. Please note I do NOT mean “geek” in the derogatory way, “being foolish, clumsy and socially inept” but rather as this pic sums it up: 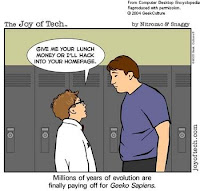 If knowledge is power – and I believe it is – then Geeks have POWER. There’s no doubt that NOT being a Geek in this day and age has its definite disadvantages. As a computer-hackery friend of mine puts it: “The Geeks shall inherit the earth.” I don’t doubt her. Anything she wants – and I mean anything – she can find it seconds. She can fix anything. Even going shopping with her is a revelation, for she has discounts on EVERYTHING YOU COULD POSSIBLY IMAGINE. Her house looks like something out of 2525. When I ask her where she got/heard about/ saw *whatever*, the answer is always the same:

How does she do it?? I spend HOURS online – but there’s more to it than simply surfing the ‘net, using Final Draft and Word. DAMMIT. She has true GEEK POWER.

And I see her Geek spirit in Dr. Who: he can do whatever he wants, how he wants, when he wants and to Hell with everyone else. But that doesn’t necessarily make him a super hero, else my friend would be, especially if she was an alien too (and I haven’t completely ruled this out). More importantly perhaps in my argument, it’s not Tony Stark’s own abilities with technology that make him a super hero either.

If you want to be a super hero, it’s all about strength and certainty.

Dr. Who never relies on his physical body to save the world. He doesn’t fight and he doesn’t create ways of making himself stronger. Instead, it’s all cerebral with him: he can save the world via his OWN MIND, with a helping hand from others and of course, technology. He can avert crises with his BRAIN – like maybe any one of us could, hence Dr. Who’s popularity. 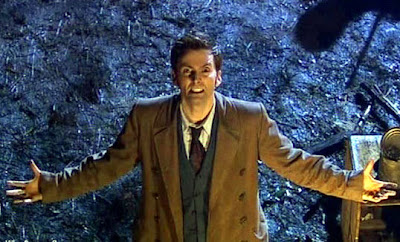 In terms of certainty, super heroes always do the right thing – and unlike the likes of Dr. Who, rarely doubt it, even when *stuff* goes wrong. Tony Stark’s proclamation: “My maths is always right!!” as everything explodes around him at one point in Iron Man pretty much sums it up for me. In fact, even when they DO doubt stuff and profess feeling conflicted, they STILL do the right thing, like Batman rescuing Harvey and not Rachel in The Dark Knight. If Batman were Dr. Who, he would have had some sort of extended rage/breakdown over Rachel’s death and Harvey’s subsequent rampage/demise; he might even have tried rescuing them BOTH, screwed it up, then berated himself and gone off to the moon or Delta Quadrant or whatever for one of his companions to drag back. But not Batman: even conflicted over the death of his childhood sweetheart, he saves the world still further by going on the run and leaving Gary Oldman to do the living eulogy, setting it all up for Part 3 (or 7, depending on how you look at it).

Is there no such thing as the BRITISH super hero? [I have a vague notion Batman is *technically* British, since isn’t DC Comics in Scotland? Yet even though Gotham is not a real place, the movies seem to place him squarely in America geography-wise, especially the latter ones.]

Or *is* Dr. Who a super hero, just a different kind?

And of course, most importantly: who’d win in a fight, Dr. Who or Iron Man?

6 thoughts on “Iron Man & Dr Who In Shock Showdown!”