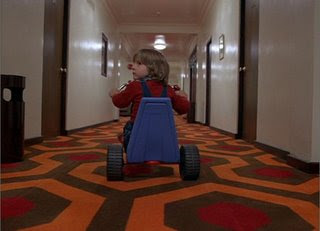 What makes affecting horror? What scares you more than anything in the world – and more crucially, stays with you, makes you shudder AFTER watching it? Seems to me as if horror these days is all about the scare whilst you’re watching, then it’s easily forgotten. There have been numerous times I have shrieked whilst watching a horror in recent times, yet if you asked me the story of the last film that freaked me out recently beyond those 90/120 minutes, I’d have think hard.

I haven’t watched The Shining in years, yet I remember so much of it, I could have watched it yesterday. Yes, certain aspects of it are a bit dated – that awful 70s carpet for one – but as far as I’m concerned, it’s as fresh now as it was back in 1980. It’s pretty different from the source material; Stephen King’s book places the blame squarely at The Overlook’s feet, with even the topiary attacking Danny; whereas the film (to me, at least) blames Jack’s growing insanity with a side order of The Overlook being built on an Native American Burial Ground. After all, his wife and child aren’t affected by the *evil* there – Jack is a channel for it – it’s even hinted that his male “weakness” makes it so, given his quick temper and self indulgence. 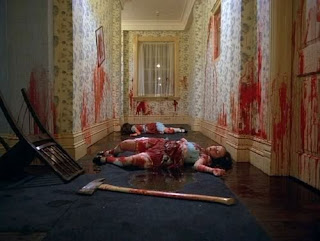 I first saw The Shining when I was approximately eight years old. Of course I wasn’t allowed, but as I’ve mentioned before on this blog I had a tendency to creep around the house at night and watch television with the sound turned down. So when I first saw The Shining, I literally just “saw” it; I heard nothing. If anything, it made it far scarier. I recall sitting in my bed after watching it, shaking with fear. There was a large built-in wardrobe in my room and I became convinced a deluge of blood would cascade out (as it had done from the elevator in the film) and soak me in my sleep. It was around this time my mother gave me a book about growing up, so when I read about periods and the like, I totally freaked, much to my Mum’s puzzlement. I became obsessed with blood in general for approximately the next ten years, writing cascades of blood into just about every short story I came up with and having nightmares in which the river outside our house ran thick with it. I even made a photography project at school about blood, photographing plugholes Psycho-style, re-enacting the famous shower scene (which I thought needed more: she’d just been stabbed to death for God’s sake!). As my Mother said to my Father at the time: “Where did we go wrong?” 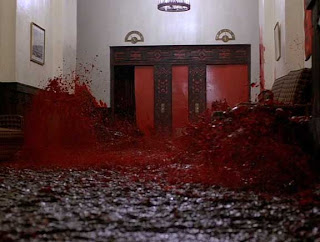 I might have been only eight, but good horror has power. If I look at The shining and compare it to Saw or even tripe like Alien Versus Predator, *technically* there is far less “horror” in terms of a body count, torture or beasts feasting on your entrails. I didn’t know it at the time because I was such a little girl, but what is so terrifying about The Shining is its plausibility. How many women have had to face a violent, half-mad spouse, with nowhere left to run and a child in tow? You can’t run far when carrying a kid; add geographical isolation and a ton of snow and it’s official: you’re totally screwed. As unpopular as it is to say it, women are at a disadvantage when it comes to the men in their lives: if he turns on you, what can you do? There’s a good chance you’re not as strong as him and even if you are, there are the children to protect from him as well. Are you all going to make it out? The number of men who manage to kill their wives and/or families is testament to the fact that women can’t always win when pitted against a man. And THAT is why The Shining is so terrifying as far as I am concerned.

What about you… What makes a great horror film?

12 thoughts on “Shock, Horror: THE SHINING”