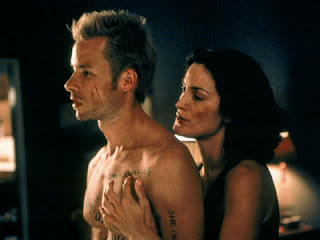 As screenwriters, we often fall so in love with the craft and all it entails we forget about good old fashioned story. Instead of dramatic satisfaction, we fall back on what would look or seem “cool” – usually relying on short cuts or one of the many maligned screenwriting devices to do this (hence them becoming so maligned).

Spec screenwriters are not alone in this either; produced movies can do this too. The only problem is, once you have *any* screenwriting craft knowledge at all, stories are perceived very differently. You may find yourself being more harsh or more forgiving of certain elements of a certain movie; you may even like something as a SCREENWRITER but not as a VIEWER or vice versa. Confused? Let me explain.

Memento is a good screenplay and crafted really well IMHO. As a screenwriter, I think it’s excellent. As a viewer? If it’s possible to split myself in two (and I think it is), I think Memento ROYALLY SUCKS. Where is the dramatic satisfaction in finding out AT THE END he’s been killing lots of John Gs we’ve never seen and paying it all off in dialogue? Why are we not privy to Natalie’s motivation in going along with Leonard when she must know full well he murdered her boyfriend Jimmy, since he’s driving his car and wearing his suit? Are we really expected to believe she wanted rid of Dodge SO BADLY she will entertain her boyfriend’s murderer, even get in bed with him – and not go to the police?! So, as controversial as it is, Memento is a well crafted story, but not a good old fashioned GREAT STORY. Yes it’s clever. Too clever by half – and they’ve missed the most crucial stuff out that will make the layperson really *connect* with the story, like character motivation. Instead it relies on its clever structure as the “wow factor” — and why not… It was a marketing tool that worked for it and catapulted Christopher Nolan into Hollywood big style. But surely a weird structure is the sort of thing that appeals more to film students and screenwriters than your average wo/man on the street?

One movie that really illustrates this notion of screenwriter vs. viewer for me is Jurassic Park. I was about thirteen when this movie came out; my Dad took me and all my brothers and sisters to see it at the cinema. We were way poor, so trips to the cinema for five kids and an adult (My Mum never sets foot in cinemas, she hates them) was an OFFICIAL BIG DEAL. My Dad is a big movie buff and he wanted to see these *new* special effects for the dinosaurs everyone was going on about at the time, now known as CGI. So it was a big treat for us and I for one was really looking forward to it; at the time, to me at least, it felt like cinema history in the making – in the same way Toy Story was a few years later. 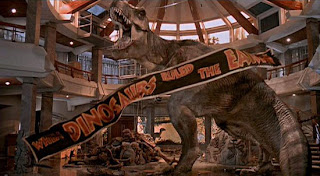 Yet I was desperately disappointed by Jurassic Park. I have always been very interested in dinosaurs, an interest that has passed down to my own children, so even aged thirteen I could see the many, rather flagrant errors in Jurassic Park, not least the fact most of the creatures are actually part of the Cretaceous Period (more dinosaur-related errors recounted here). However, I recall my biggest issue aged thirteen involved the velociraptors and though I didn’t know I was doing it, it was their place in the narrative that threw me out of the story: the fact one opened the door I could *just about* go along with, but by the time Laura Dern has locked one in the electricity place, that leaves two (“She killed all but two of the others” = three velociraptors, thanks Bob Peck), yet if I recall correctly, in that resolution scene in the big hallway, three appear to corner them all, leaving us to assume the first raptor must have opened the door again. But I could have forgiven even that, if it wasn’t for the fact the T Rex saves them all by eating said velociraptors. I didn’t know the term Deus Ex Machina when I was a kid, but if I had, I’m sure that’s what I would have used to write in my Day book about the movie I had seen at the weekend. I’d have been wrong of course; we see the T Rex earlier eating the Gallimimus in the same way, but even so I didn’t find it DRAMATICALLY SATISFYING. [2013 UPDATE: Weirdly found myself discussing this again, four years after this post (life is so cyclical). Here’s script editor @Ellardent on the T Rex and the supposed DEM in Jurassic Park. PS. It’s now TWENTY YEARS since Jurassic Park and Jurassic World is coming – SQUEEE!]

So a whopping sixteen years pass (where did it go??) and I didn’t watch Jurassic Park again until last week; it happened to be on television [ITV2 I believe]. My son revealed an ardent LOVE for the film (much to my surprise and chagrin) and because I couldn’t find anything else worth watching, I reluctantly sat down with him and the girl to watch. So imagine my surprise when I found myself actually enjoying it. It suddenly occurred to me, as I was watching, that the reason I was enjoying it was because I wasn’t watching the film with the expectation a non-screenwriter puts on a film. A non-screenwriter wants to be entertained; they want the story to be “good”, though they may not know how to express whether a story is “good”, it’s just a feeling. I wasn’t putting any “feelings” on the line then in watching Jurassic Park this time; I was appreciating the well-differentiated characters and the clever dialogue, if not the idea that velociraptors can open doors.

Part of screenwriting is ripping your script down to its individual parts; scripts are like jigsaw puzzles of dialogue, structure, character, description, whatever. Ideally these should all work together symbiotically in creating the best story, but sometimes they don’t. Jurassic Park shows very obviously you can take giant leaps of faith in terms of the narrative “hanging together” and the audience will stay with you — they were quite literally looking at other stuff, like THE BIG DINOSAURS. That was what they came for; that was what they got. For every person like me who was disappointed in the story, I’m willing to bet there was at least a hundred who went away thrilled. Similarly, there are many people out there who watched Memento and thought it was the coolest story in the world, never wondering for a moment about Natalie’s odd characterisation or that talky pay off.

Basically: sometimes screenwriters (or the producers holding the purse strings) make short cuts and sacrifice even entire beats or elements AND get away with it.

previousWatch It, Vote For It, Pass It On…
nextC-C-Check ‘Em Out