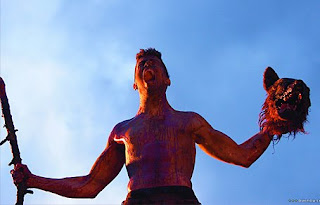 So at the weekend I found the Brit movie Wilderness in a bargain bin. I was surprised to see it, I’d never heard of it before – especially since it starred horror/gore fave Sean Pertwee and was directed by Michael J Bassett, who directed one of my fave Brit movies ever, Deathwatch. One of the critics on the back of the DVD box hailed it as “Dog Soldiers meets Scum with a side order of Lord Of The Flies”. What’s not to like there?! Add that to the fact The Hub has worked with young offenders, it seemed the perfect film for us on a saturday night with a load of beer and treats.

Of course, going out into the woods/desert/whatever and getting yourself killed is not a new premise by any stretch of the imagination. Whilst it’s not *exactly* my favourite of all the horror premises, I see enough specs year on year with good variations on the theme to know there’s more than one way to skin a cat (or kill Sean Pertwee, who seems to making a good living appearing in such films when he’s not doing Shakespeare or voiceovers for ads and nature programmes). And certainly, there have been some interesting and even good produced woodland Killer movies of the last ten years, Severance and Bone Dry being just two.

So, anyway. We settled down to watch Wilderness and practically from the off it became apparent this was a seriously “undsercooked” screenplay in terms of structure and character. The protagonist, Callum, is passed off as a mysterious loner (when in actual fact he’s just underwritten IMHO) and for the first Act especially we even forget about him a bit as we concentrate on the much more interesting (not to mention vile) Steve The Bully. Davie kills himself very early – the catalyst to get our offenders to the island – yet we’re left wondering why when he has an ally in Lindsay, who is also bullied. Cue the obvious: Lindsay is going to make sure *somehow* all these boys PAY for what has been done to his friend. Yawn.

There are some nice moments horror-wise. Blue, our token Asian, gets his leg cut off in a bear trap, then his head stuck in another and Sean Pertwee goes out in his usual gory glory, first getting shot by crossbows, then disembowelled by Alsatians. Similarly, the Hunter’s use of dogs – and the sinister whistle that precedes their every attack – is fantastic and something I’ve not seen before in a woodland-killer-story. The Hunter’s use of camouflage too gives the notion it’s the woods coming alive to kill them as well, another nice touch.

But a few nice moments doesn’t a good film make. Pertwee hasn’t got much to work with in terms of his character, youth offender team leader Jed: Alex Reid, previously seen in The Descent is similarly sketchy, appearing on the island at the same time with her girl offenders as a convenient excuse for some teenage rumpy-pumpy, rather than an organic part of the story. I was also left wondering why she had to come back to life after going over the cliff in a blaze of glory, taking one of the dogs with her – just to get her throat cut moments later by The Hunter. There’s a tramp also who appears on the island for seemingly no reason other than getting killed and there’s even a token Black character who is killed very early on in the story too. Egad! Have we not left those days behind?? At least Parker in Alien survives until the resolution – and that was 1979! 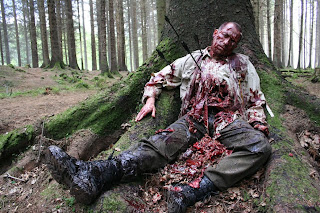 And that’s the *real* issue in Wilderness really: we couldn’t give a damn about these characters. Whilst Callum waxes lyrical about how he’s “different” from the other boys because he is going to get out of the “system”, we never really get behind him or believe he is as “different” as he claims. In fact, he seems more and more of a psycho as the narrative goes on, advocating eating dead Alsatians and sticking their heads on spikes in some sort of pissing contest with The Hunter that never really goes anywhere and is kinda predictable because we *just know* Callum will win somehow, despite The Hunter being ex-SAS. In comparison, Steve is also a psycho, but far more interesting, offing his best friend Lewis himself (rather than let one of the Girl Offenders have him) and then allowing her to die at the hands of The Hunter when he could have prevented it. His offering Lindsay on a plate to the Hunter too was a great moment, only undermined by the fact we must surely *know* Lindsay is in on it with The Hunter, for surprise, surprise, The Hunter is Davie’s Dad, the boy who killed himself at the Young Offenders’ Institution earlier – and a piece of exposition Lindsay even FED to the group when they are besieged by the dogs inside the scout hut in the beginning of Act 2.

Wilderness could have been a great film, but it registers on my WTF? radar as it could have so easily been “fixed”. How?

Wilderness was supported by Northern Ireland Screen and the UK Film Council and whilst Wilderness’ potential is quite obvious, the fact it is, it was hopelessly underwritten in terms of character and structure. In fact, it could easily stand as a great learning curve for wannabe scriptwriters: THIS IS WHAT HAPPENS WHEN YOU DON’T DEVELOP CHARACTER AND STRUCTURE ENOUGH! Yes, plot can *sort of* work, yes you can have plenty of gore, but your film is not going to be listed amongst the great horrors when character is flimsy and structure is lumpy. And the sad thing is, it’s these two things that can be fixed relatively easy – with time and a few more drafts. Now, perhaps the filmmakers didn’t have a lot of time; I don’t know what happened. But if they weren’t given much time and this is the result, then screen agencies have to take that on board when deciding funding for films, otherwise producing rubbish movies with public money will impact negatively on the British Film Industry. Of course, maybe the movie was just pants and it happened to be the best of a bad bunch when they decided on who to give the money to before the end of the tax year.

Have you seen Wilderness? I’ve been quite surprised by some of the favourable reviews I’ve found online, the average seems to be about 3/5, when I would probably give it a 1.5 at best. What do you think?

previousOPPORTUNITY: Feature Comedy Wanted Right Now
nextSlash Fund: The Hunt Down The Back Of The Sofa Campaign!