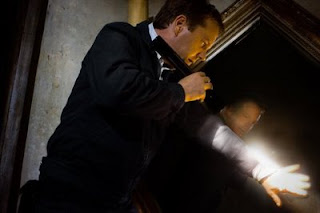 When The Hub phoned me from the DVD store to report the only two recent movies we haven’t seen were this week Max Payne starring Mark Wahlberg and Mirrors starring Kiefer Sutherland, there seemed to be no contest. I’ve long since loved Ol’ Kief, since he’s starred in such childhood faves of mine Flatliners, Lost Boys and Young Guns and since of course there has been the fabulous 24. Plus Mirrors is directed by Alexandre Aja and I liked his remake of The Hills Have Eyes. So I settled down with Hub, some crisps and beer for what I thought would be a fun film.

I supposed it wasn’t *all bad*: it looked fabulous. The set of the burnt down department store, the make up of the burned people, the eerie, blackened corridors with melted mannequins, was great. There was some excellent gore, with the film opening with one guy slashing his throat right open and later on, Kiefer’s sister (Amy Smart) pulls her own jaw off: nice! And it’s not like I expected it to be a masterpiece or anything. The idea of malevolent mirrors isn’t exactly a new one, but it does have enough about it to be intriguing: I’m interested in psychology and there’s a recognised condition in which people’s personalities fracture, so they believe there is another world, another “them” inside the mirror – they even touch on it in the movie, though they never really explored the notion in my opinion.

However, it’s like Aja spends so long making it look good he forgets there’s actually supposed to be a script as well. The characterisation is so under-written, with dialogue so clunky, it’s embarrassing. Kiefer’s sister (played by Amy Smart, who usually sparkles on screen yet has the personality of a wet fish encased in concrete in this) was such an obvious facilitator to Kiefer’s character, you *just know* the mirrors are gonna get her: “You should stop taking those pills,” she advises; later on: “You’re just feeling conflicted right now.” Sage. Same with Kiefer himself, as he says to his estranged wife, seemingly a hundred times just in case we don’t remember why he’s such a mess: “I killed a man!!” The wife will soothe him with “It’s not your fault”, only to follow it with “I’m calling the police, get away from my children!” moments later. No wonder the poor guy’s feeling “conflicted”. 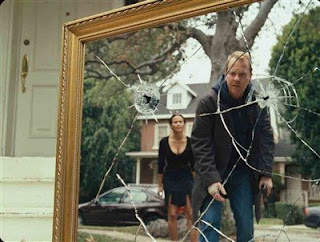 Yet all that would have done little to register on my WTF? radar; there are countless bad films around and if I wrote a WTF? post for every one of them, I would never be short of material for this blog. Plus, I am the first to concede that films don’t always come out the way their makers might have wanted; studio interference for example can raise its ugly head and make even the best screenplays become the most unadulterated dross. And let’s face it, Mirrors is not the first film I’ve seen with bad dialogue and characterisation this year – or in my life. No, what put Mirrors squarely on my WTF? radar – so much so I resurrected this post series for it – was its resolution.

I don’t get offended by film often. I don’t believe there are that many *dangerous* films around, where filmmakers (wittingly or not) present viewpoints that are downright repugnant, simply because I’m squarely of the belief that story is open to interpretation and what doesn’t work for me, is more than likely to work for someone else. Also, because stories are open to interpretation in my view, I figure that there is a different way of looking at it, I actively try and find ways of seeing it another way, if you will. Yet try as I might, I could not find another way of looking at the notions presented in Mirrors’ resolution:

The idea that mentally ill people are possessed by demons/evil. The mirrors in the dilapidated dept store Kiefer works in has already claimed many victims; they want something – or someone: “Esseker”. Doing his research, Kiefer discovers the old dept store used to be a mental hospital (here we go) and a young girl, just 12 years old, was treated there *way back when*. There was a massacre in the hospital just after this girl left (it was said she died in that same massacre, but Kiefer realises she didn’t) and goes looking for her. Kiefer ends up at the Esseker farm; the brother of the girl reveals the girl – his sister – was prone to terrible rages, so much so the family had to keep her in a subterranean room under the farm. A well-to-do doctor came, diagnosed schizophrenia and took her away to the hospital. There, he made her confront her reflection for hours and hours, even days — until at one point, as the adult girl says (now a nun), “the demon left her” and passed into the mirror. Sorry, but I gotta stop the script there: schizophrenia akin to demonic possession? What decade are we living in here, what century?! This kind of crap went out with bathing so-called “hysterical” women and those with postnatal depression in ice baths, or zapping mental patients with squillions of vaults against their will! I felt sure I had to be overreacting, yet, once the nun returns to “confront” the mirrors, what happens?! She gets blasted, the mirrors break and hey presto: a demon appears! OH. MY. GOD. Also, if the “demon” loved her so much it spends fifty years torturing security guards working on the site, WHY did it go into the mirror in the first place and kill her the moment she returns?!?

The idea that mental illness is somehow their fault. When Kiefer makes his pilgrimage to the convent to try and persuade the nun to return with him to the dept store/mental hospital, he makes a big deal of making her look at a photo of his family – they will die if she doesn’t return, he says. He asks her what his children have done to deserve this fate — a fair point you might think until you factor in these others: the nun was just a girl of 12 when she got schizophrenia. How is that her fault? Her family LOCKED HER UNDERGROUND and this doctor subjected her to HORRENDOUS TORTURE that is not even legal in this day and age. She had to go through all that, THEN hide out at a convent for the rest of her life, avoiding mirrors – and then this guy comes and asks her to go on what can only be described as a suicide mission. Whilst it’s very unfortunate Kiefer’s family might die, why is it her responsibility? Presumably for being so crazy as to end up incarcerated in that mental hospital/torture house in the first place. That gives me THE RAGE, big style.

What did you think?