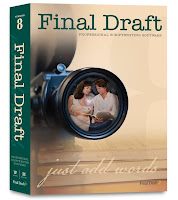 I’ve been writing so long now I started on a typewriter. Seems mad now; you can’t delete typos, you don’t get multiple copies (can’t store them either) and maybe it was just me, but I always used to get my eight year old fingers stuck between the “s” and the “z”, taking the skin off them. Ouch!

I never came across Final Draft until I became a script reader; at university I always used MS Word and manually formatted as I went along. God it was dull! And time consuming. Final Draft’s price tag put me off at first; I thought, what could screenwriting software do that I couldn’t?? Then I had a go on it and loved it, so had to eat my words: it really did take the stress out of formatting. But I didn’t have a computer at this time and besides, I was a single Mum and had other stuff to buy, like food.

Anyway. Fast forward to 2005 and I had some spare money and I was gonna buy me Final Draft. Being a canny shopper I tried all the others as well, even the free ones, but they just didn’t do it for me. There was something so much simpler to Final Draft; I could write on it without reading the instructions and it didn’t explode or turn my scripts into gobbledy-gook. Naturally, being a technohoper not reading the instructions meant it took me most of the last four years to figure it out – I only found the “script notes” function about three months ago, lol – but basically: I was a Final Draft user and very happy generally with my lot. So when Final Draft revealed the much-anticipated Final Draft 8 and kindly offered me a copy to try, I have to admit I didn’t see *how* they could improve it. Whilst Final Draft was by no means perfect, it had everything I wanted… Or thought I wanted.

First off, it looks different: in addition to the top tool bar “Final Draft/ File/ Edit/ View” etc, there’s another tool bar directly underneath with picture icons to click on, making navigating to many functions A LOT easier and quicker. The title page is now one of those icons on the top tool bar as you write which I think is a great idea, since it took me AGES as a Final Draft newbie to figure out how to change it. What’s more, the spelling/thesaurus function is easily on hand too, which is great cos I often access the latter and find it really irritating to keep having to select it from the Tools drop-down menu. Script Notes too are on there now and it’s suddenly a function I use, unlike before when it was hidden away. 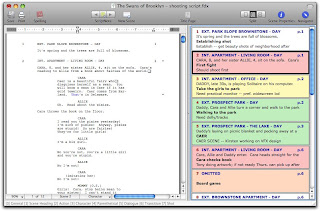 But the real advantage to Final Draft 8 over Final Draft 7 is the new “scene properties” button on the icon toolbar. Click it and a little window comes up where you can name or number the scene, make any notes on it that you want – or perhaps you want to “sum up” the scene or break it down – and you can colour code it too, one of seven colours including red, purple and grey. To help you do this there’s a Navigator so you can find all the stuff you need at a glance.

Whilst this multi-coloured function might seem superfluous to some, I think it’s a brilliant idea for those writers in need of help diagnosing structural issues in particular or other elements going “wrong” in their early drafts who don’t respond to more manual methods like index cards. I read a lot about other writers using corkboards, whiteboards, coloured pens and whatnot and the whole thing leaves me cold; I like it just me and my Macbook, so the opportunity to do the multi-coloured thing in the actual software is brilliant for me. Just imagine how much easier it will be now to flag up those “gut feelings” on problematic scenes – you can write a note to yourself, highlight it, come back to it later… I had essentially been doing this manually myself on Final Draft 7 using the highlighter from the “Format/Elements” function, but this is a waaay easier and more time-efficient way of doing it, plus there’s the room to make as many notes as you like without actually infringing on the text of your script like I was before.

I had just two criticisms: the “Assign Voices” function sounds as robotic as ever and they’ve put “save as pdf” under PRINT rather than FILE, which I think is a mistake as I’ve had several Twitter and email conversations with stressed writers believing there is no PDF function anymore when there most definitely is.

Overall however, Final Draft 8 has enough about it to feel like a much-improved Final Draft 7. I think if you’re wondering about taking the plunge and buying some screenwriting software, Final Draft 8 is the way to go as you’ll have a much easier time of it getting started. Final Draft 7 users can buy an upgrade to 8 which is considerably less than buying the whole thing; I’d recommend it if you feel like you’re not getting *enough* from Final Draft, especially in the way of navigation and ease of use diagnosing issues, etc. If you can’t decide, get them to send you a demo disc [visit site below].

Buy/Upgrade to Final Draft 8 at The Screenwriters’ Store

Buy/Upgrade to Final Draft 8 at Amazon

previousSlash Fund: The Hunt Down The Back Of The Sofa Campaign!
nextLooking for Eric (No Spoilers), Slash & Other Stuff