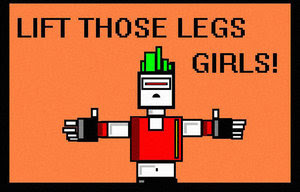 So I went to some uber-funky, “let’s-pretend-we’re-not-actually-doing-exercise-but-we-are-really” exercise class called DANCE JAM last night. I figured it wouldn’t *really* be as fun as they made out in the brochure, but since THIRTY is looming on the horizon like a big fat black cloud (four months and counting!!!) I figured I needed it. The weird combo of high cholesterol and low blood pressure is rife in my family amongst the more “mature” members, so I might get started on fighting back THE SAG, especially as my delightful son said only last night, “You’re not fat Mum, it’s just your clothes making you look fat.” Thanks son! (Yes, I know I tweeted that yesterday – while we’re at it – subliminal message: follow me on Twitter! You know you want to! End of subliminal message).

So we took our places and I was delighted to find I wasn’t the oldest OR fattest person there, by a long shot. I was somewhat freaked by the gigantic big mirror that ran the length of the place though – I don’t tend to look at myself for longer than it takes to apply eyeshadow and a spot of lippy, so was tres weird. I could get over that though if it wasn’t for the fact I was standing next to a super-fit Granny with the kind of body I would ACTUALLY KILL FOR. I consoled myself with the thought she probably hadn’t had any kids though and was one of those freaks who ran up mountains and only ever drank those disgusting protein shakes, sleeping in some kind of oxygen tent at night. Gotta be.

The extremely pert, gorgeous Instructor however didn’t have a hair out of place the whole time of course while the rest of us got hot and bothered. She also thought she was on Top of The Pops and took to singing some of the uber-80s choons we were dancing to: “Chaka Khan!” (I was reminded at this point, huffing and puffing, of Homer Simpson going over the pier in one episode: “SAVE ME, CHAKA KHAN!”) She also took us through some of the most bizarre, yet strenuous routines I have ever taken part in. And some of them, frankly, were rather vulgar. I mean, we’re supposed to be getting fit! Is it proper to be shaking our booties, shimmying and pelvic thrusting *quite* so much! Egad.

So, what felt like thirty million years later – it was actually fifty five minutes – I had fallen over onto my friend Cara, I’d elbowed a lady in green BEHIND ME somehow and a large, incredibly tall girl had windmilled into me and nearly taken me out. Delightful. And I’d paid nearly five pounds for the privilege.

I will of course be going back next week. I paid for the class in advance straight after finishing, otherwise I knew I’d find some excuse: “I’ve gotta do a script report”, “The kids are ill”, “I’m DEAD!!!” Blimey. The things you gotta do just stay on the planet.