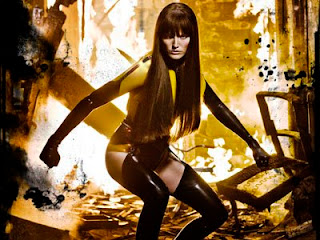 As you know, my spies are everywhere, reporting back to me all things of screenwriterly/movie interest. This week alone I have received reports of Keira Knightley (or someone who looks rather like her) in a coffee shop in Soho and someone off Eastenders having an argument on their mobile in the middle of the street.

However, my favourite has to be this mini review of the film WATCHMEN I received last night:

Hey, I rmbr [your lad] saying he couldn’t wait to see the film Watchmen. Well I’ve just seen it – don’t let him!! Apart from it being one of the shittest films I’ve ever seen, it contains medium core sex and ridiculously gory violence, ya know bones bein pushed thru skin, arms being sawn off, etc… It ain’t your average super hero flick! Even Dr. Manhattan spends the whole film with his flaccid cock swinging all over the shop!

So now you know. Arf.

I’m hearing mixed reviews from the people I know who’ve seen Watchmen – it appears to be one of those movies you either LOVE or HATE. I haven’t seen it yet and am largely ambivalent about it, one of those I’ll catch on DVD no doubt, though I can’t say I care for the uber-kinky sex kitten outfit the lady Watchman wears… Though if Dr. Manhattan is actually full-on nude, I guess that evens up the score a little (don’t they worry about their bits getting roasted or chopped off when fighting crime??).

So – what do people out in www.land reckon? Let us know what you think: remember – if you’re going to spoil, label it as such in the comments section. I don’t care about spoilers, but a huge amount of people do. Bring it on…