Snow In The South West! 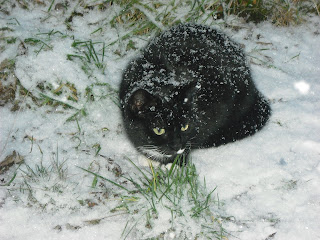 Crampon-Fred might be a mongrel cat (I believe the correct term is “ragdoll”, I is bein’ cat-racist, man) but he showed this morning he’s pure-bred MENTAL by playing outside in the snow for a full hour. His adopted sister and brother cats merely whimpered at the sight of the snow and went upstairs and hid under the bed in my room. Where they still are. None of them are particularly used to snow; bar the tors of Dartmoor and the coombes of Exmoor, Devon is not known for it and neither is Bournemouth, due to the coastal influence — or something (geography was never my strong point). And of course, the SW can’t cope: poor ol’ Hub just rang me a moment ago to say he got to work — at TEN FIFTEEN. He set off at quarter to eight and his school is about four or five miles away. *Sigh*.

Anyway, whilst we’re on the subject of photographs: there are new photos up on Safe Films – this time of the actresses we picked for the parts of “Teenage Girl” and “Girlfriend”. Go and check them out now. Both actresses were great and I’m looking forward to working with them, just as I am the rest too. Shoot’s on Saturday – SQUEE!

8 thoughts on “Snow In The South West!”

previousWTF? On Film 5: A Franchise Too Far
nextManic Script Preachers