I can just imagine the Execs who commissioned VAN HELSING: “Get me a screenwriter who can deliver a script based on the Dracula myth… but make it new and make sure there’s some like, ninja stars/mini buzz saws in it. Oh: and Frankenstein. And Jekyll & Hyde. And monks. And hell! Let’s shove some werewolves in too, why not? But make sure there’s a reason FOR ABSOLUTELY EVERYTHING IN IT – except maybe the ninja star/buzz saws, we’ll let them off that one. And call Hugh Jackman, he looks good with his shirt off, maybe he carry long hair and a really bad wax jacket too. And isn’t the director from THE MUMMY free? Nice one, kill two birds with one stone: he can write the script an’ all. Oh and what about Kate Beckinsale who only ever appears to play vampires when not in Pearl Harbour? That would be fantastic irony then, casting her as a vampire HUNTER — do it!”

Everybody, all together now: WTF?????

I think, had I been hired to pen the screenplay of Van Helsing, I might have had a heart attack: Dracula meets Frankenstein meets the Wolfman is bad enough without having to shove all the rest in there too. Somewhat inevitably then, VH is absolutely DROWNING in set up, with not one or two but THREE lengthy introductions to the characters and the situations they’ve found themselves in. Interestingly, we start the movie not with Van Helsing himself, but Dracula and his dealings with Dr. Frankenstein; then we see how cool and prepared Van Helsing is when he deals with Mr. Hyde (now that really is WTF? Why Mr. Hyde? Why not another vampire?? Why not, I suppose) and then we deal with Princess Anna dealing with a werewolf – only shock! horror! her brother is killed doing so (don’t worry, he’ll be back). 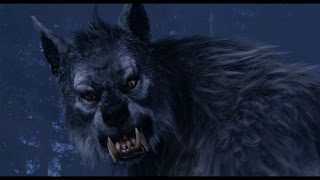 There’s no denying Van Helsing is pure bilge – but I have to admit, it’s enjoyable bilge. What’s particularly interesting about Van Helsing is that, even though it *has* to be one of the most convoluted and plain mental films I have ever seen, in comparison to something like Doomsday, there is actually a consistency in tone and a (sort of) coherence that I think is totally missing in the previous film. In fact, Van Helsing is so off its rocker, one can’t help but go with the flow – or be deemed one of those nasty grannies who should be confined to the attic for having no sense of humour. Think I’ve gone completely mad? Let me explain.

Two stories = too much: three has purpose? Shoving three stories into one might seem like pure insanity, but there is a twisted genius to it: after all, Van Helsing never takes itself too seriously and end of the day, it’s kids who will predominantly be interested in this film. Kids who may never have heard of Frankenstein – and whose only experience of the werewolf myth might have been Halloween masks and *that* Dr. Who episode when Billie Piper was still in it. They’re too young to have watched Teenwolf because they weren’t born and the Buffy episodes with Seth Green as a werewolf would be too scary. There’s child-like logic throughout the whole of Van Helsing (Dracula needs Frankenstein to power the machine to make his babies come alive; a werewolf bite is the only thing to stop Dracula) that appeals, to, well – children. OF COURSE Dracula’s babies would be born dead if he’s undead! (Er, excuse me – how did Dracula’s Brides get pregnant in the first place then??) OF COURSE a werewolf stops Dracula!!! (Er, excuse me – if that;’s the case, then why does Dracula keep werewolves in his castle??) BUT WHO CARES – we can gloss over those bits because the REST makes sense – if only within the context of a mad, totally insane, concept. In its twisted way, it all adds up and Van Helsing starts as it means to go: mad and insane. And consistency goes a long way.

Join us or die. When it comes to the insane and high concept, Hollywood has a long track record of highly implausible, sweep-you-along, kid-orientated tales like Van Helsing. Whether you actually like those tales or not, it cannot be argued that Hollywood doesn’t do it *well enough* to bring audiences back, year after year, decade after decade, even if their stories are as schizophrenic as Van Helsing’s. So whilst the likes of Doomsday had Brit audiences scratching their heads, Hollywood has the ultimate in “get out of jail free cards”: they’ve done this malarkey before and got away with it – and they will do it again. What’s more, they know where their currency is: they don’t disenfranchise kids, but make it risque “enough” with a 12A certificate. As a result, kids will drag parents to hours and hours of this stuff. The choice is clear: you can give up and get swept along by this crap and find in it what’s enjoyable – or you can be dragged out of the Odeon, screaming, by the men in white coats.

Dracula, revamped? I obviously read A LOT of vampire films – in fact, I worked out recently I average ONE A WEEK. That’s right; that’s how popular vampires actually are. And guess what? Nearly all of them adhere to what I call The School of Buffy – in other words, the undead are uber-cool, wise crackers who dress well and are dead sexy. Yawn! The few that don’t are still very much on the “low budget” radar – they’re men and women who will suck your blood, end of. I have seen two versions of Vampires in the last two years I have deemed truly “original” in specs – TWO. In comparison then, Van Helsing’s Vampires were a refreshing change, if only for the fact Dracula himself owes more to the Hammer Horror style Draculas of the 60s. Cheesy as hell, hamming it up big style whilst walking on the ceiling, Richard Roxburgh’s Transylvanian accent was on the Russian side of Barking, but by God, thanks for something different!!! His Brides too in their human form seemed quite Hammer Horror – until they TAKE TO THE SKIES. Vampires flying! Yay! Why not? It appears vampires in most films have forgotten their bat roots, but here they are soaring above us – and not only that they have WINGS LIKE FALLEN ANGELS AND FEET LIKE EAGLES. What’s more, even the werewolf myth got a workover: unlike your average werewolf which is stuck in AMERICAN WEREWOLF IN LONDON writhing around around on the foor, Van Helsing’s werewolves get magnified somehow to the wall and PICK OFF THEIR OWN SKIN. As my son shouted in the cinema at the time: “ACE!” 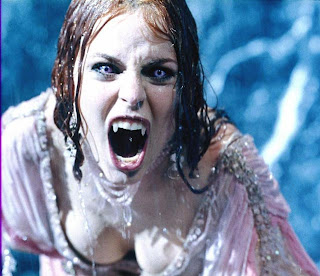 As an aside, Van Helsing was responsible for my son’s very sudden interest in horror fiction. The same week we saw Van Helsing at the cinema, he had me take him to the library in order to take out not only a junior version of Mary Shelley’s Frankenstein, but a Robert Louis Stevenson’s Dr Jekyll and Mr Hyde. I’m sure the filmmakers didn’t shove all those previous stories in the mix in a philanthropic bid to get our kids reading, but it is an impressive side bonus; so perhaps the impact of such crazy films which draw on “old” tales is not to be underestimated, if only on that basis.

But for me, whilst Van Helsing is essentially a screenwriting nightmare, I think it’s also important to remember it never purports to be anything but what it is – a pantomime. And we all love pantomimes, right…. Or not? Over to you…
————————————————————————————
Van Helsing on IMDB