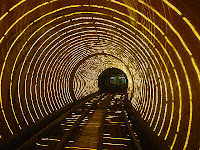 It’s been a while since my last confession… I mean post, in this series. There are so many great specs doing the rounds, but IN GOD’S NAME by Bang2writer John Killeen has placed not only as a Quarter Finalist in Bluecat and Silver Screenwriting, it made the top fifteen per cent of the Nicholl AND the semi-finals of Big Break! That’s quite a feat by anyone’s standards, so I thought I’d take a look at what makes this big budget action-thriller such a hit with readers over the pond, since I’ve read it too.

IN GOD’S NAME might sound like it *could* be a hardcore, life-affirming foreign language drama or one of those 1960s epics starring Elizabeth Taylor, but in actual fact it has much more in common with Die Hard and Daylight. Set in New York, IN GOD’S NAME finds a cop hero having to fight his way through a network of underground tunnels to rescue a missing girl from a crazed antagonist – who just so happens to have created a bunch of booby traps in those tunnels based on the infamous Biblical Plagues of Egypt. Of course, our hero is not rescuing this girl from *just* the goodness of his heart -his own family is in danger, too.

There is some superb gore and high octane excitement, not to mention a high body count as our hero is not the only one to make it into the tunnel: I would imagine if this was produced, it would be an 18 (that’s an “R” to our American cousins). This is the type of big budget fare producers get all hot and sweaty over, so it has been no surprise to me to me it’s done so well on the contest circuit. When I read it approximately a year ago, the draft had its problems, but it oozed with potential. In short, as a premise, IN GOD’S NAME is genre movie gold: you want blood, guts, excitement? And you want it UNDERGROUND? You can have it with both barrels, baby!

The first issue was a relatively minor one, but one that made quite a large impact. John’s arena was great, but it FELT like an arena: in short, the New York I saw in IN GOD’S NAME felt like it had more in common with movies than a “real” NY. Of course, that sounds crazy – I’ve never been to New York, after all. Yet the arenas writers create have so much to do with personal interpretation: can a writer create an authentic arena from somewhere they’re not really familiar with? John ummed and aaahed about relocating the script to an English location and certainly, there’s no reason he couldn’t have. After all, we have massive tunnel systems under many great British cities, London the most obvious, not to mention the tube – plus Liverpool, which has an intricate system of tunnels underneath thanks to bizarre philanthropist Joseph Williamson in the 1800s. In the end, John opted for keeping the script in New York, but decided to find that *certain something* that would set it apart in terms of arena from other NYs we had seen before. It might seem trifling, but given audiences all around the world are familiar with America thanks to the Global Village, an America arena still needs YOUR stamp on it.

Its second issue was structure. John had written a top heavy draft in which characters were set up meticulously – too much. We were given an insight into their mindsets brilliantly, because character is one of John’s strong points; this meant we could empathise with them really well, yet we were waiting for the story to really get going. I suggested John explore other ways of introducing not only this excellent characterisation, but the scenario at the same time – much like its obvious predecessor DIE HARD: John McClane is introduced not only as *just* a cop, but a husband and father who might be a nightmare, yet would be prepared to die for his family. After all, when the Nokatomi building is taken over, he could have escaped – yet he *chose* to fight, since his wife was inside. He might have been a crappy husband up until that point, but I think I would probably forgive him too!

Its biggest issue when I saw it was the fact it just wasn’t simple enough. There were two potential antagonists in the original draft and inevitably, rather than adding to the tension, one took away from the other. It gave the draft a convoluted feel – especially when it came to the cop’s kidnapped family – and made the feel of jeopardy suffer in my opinion. Believe it or not, there is such a thing as too MUCH of a bad thing in the genre movie: whilst it’s always encouraged that writers heap misfortune upon their protagonist, sometimes it *can* become overkill. John realised very quickly that he needed to strip his story back to its simple, genre roots, remove that convoluted element and gain a stronger script for it.

But all of this was made possible by the fact John was so receptive to feedback. A script reader never should want a writer to “agree” with them – I made many suggestions on the ins and outs of story, particularly with reference to the girl in the tunnel, which John never took up. Instead however he used my notes to produce the best draft he could of a very exciting, high adrenaline chase/quest movie. Nice one, Mr. Killeen! I’ll be booking my ticket for the big Hollywood premiere with red carpet, champagne on ice and Ryan Reynolds on standby… Kthxbye! ; )
—————————————————————————–
If you’re a producer or filmmaker who would like to read IN GOD’S NAME, please email John at john.killeen”at”gmail”dot”com. Thanks!

previousLiar, Liar, Pants on Fire
nextAnnouncement: Bang2write On Board With Initialize Films