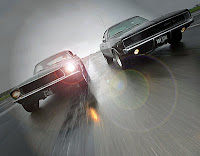 There once was a time the spec pile only ever involved two or three genres, especially from the “newer”, Brit writers: the reader would be treated to the uber-low budget social drama, the horror where everyone is stuck in one place and the low budget rom com where everyone hangs out in two or three locations. There were obviously exceptions, but when I first started reading, Brit spec writers *generally* seemed to stay away from the likes of period drama, the supernatural (barring vampires and their lack of make-up) and of course, the big explosion-style action movie.

I’m pleased to say that Brit spec writers are branching out more now. No longer do I hear cries of “But it’s too expensive!” on a daily basis. Writers seem to have realised, finally, their scripts ARE speculative; they can do what they want. What’s more, they’re realising the more ambitious they can be, the more they can show off what they can do. After all, as good as your spec is, it’s unlikely to be made EVEN IF it gets optioned. That’s just the way of it. Write what you want, show what you can do. If that so happens to be low budget – brilliant. But if not, don’t be afraid of writing it; don’t think it’s worthless. Use it as a sample. Stick your writing in *somebody’s* head, get yourself remembered.

However, one thing I do see with some regularity is a lack of good action sequences -even in action movies. Very often, an action sequence will say *something* like:

“The building blows up.

“Dianne gets in her car, races through the streets. Jack follows. Dianne crashes.”

Doin’t give your reader an “IOU” like this: you’re essentially saying, “When this is a REAL MOVIE, you can see the rest of it.” Noooooooo! I can’t speak for other readers because they’re not me, but this really winds me up since a) the writer is reminding me THIS IS SUPPOSED TO BE A MOVIE and b) there’s a big space where the story should be!! Obviously, you want to be lean on the scene description – and that’s cool. But that doesn’t mean you can just LEAVE IT OUT altogether.

A really good, well-written action sequence not only adds to your story, it can reveal character too. If your character is willing to grab a bomb and run with it through the streets to shove it somewhere AWAY from pedestrians, that says a lot about them. Equally, if they run AWAY from the bomb and let the pedestrians take their chances, you have character there too.

Whilst no one wants to see explosions, deaths and car chases in there for pages and pages AND FOR NO REASON in the story, equally you don’t want to go too far the other way too and skimp on the action. What’s more – you should note there is no “right way” to write an action sequence beyond going overboard or skimping on it; I’ve seen sequences that are half a page and really exciting, just as I’ve seen ones that go on for several pages that are fantastic. As long as it works within the context of your story and what your characters want/need, it’s all good.

So next time you find yourself wanting to write an action sequence, don’t skimp. Make it part of your story, reveal some character if you can, take us along for the ride.

9 thoughts on “Note To Reader: IOU One Action Sequence”

previousIt’s Official: I Am A Red Planet Reject
nextLiar, Liar, Pants on Fire