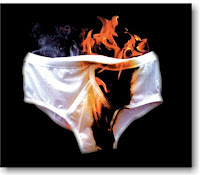 I am a terrible liar. I read about these people who have mistresses and male bits on the side (misters??) FOR YEARS and wonder how they manage it. Even if I wanted to have an affair (I don’t, in case you’re reading my lovely husband, lol), I don’t think I would just on the basis of how stressful it must be. Accounting for where you’ve been; making sure you don’t smell of the “other one” or even just *looking* guilty. Yikes. I’d sooner just concentrate on the one relationship – hell, I don’t have time for another one, anyway. Too busy! (JOKE, honest! What do you mean you’re going to your parents’?!?!)

Yet, remove me from people I know (even slightly) and plonk me in front of a complete stranger and I tell the most enormous whoppers. It’s a compulsion; I can’t help myself. It seems to only happen on trains too – as if just getting off the platform turns me into some kind of big fat fibber with her pants on fire. I suppose it’s ‘cos I get bored on trains – and reading really is a busman’s holiday for me, obviously and I’ve never been one for iPods and the like. I’ve posted before that I’m the weirdo your mother warned you not to talk to on trains, but until quite recently I’d always been truthful. It’s an interesting turn of events that I’ve started to lie – maybe it’s the talking equivalent of drugs: the soft stuff is no longer satisfying, so I’ve had to move on to something harder (oo er).

So far, I’ve managed to have long fake conversations about my fake life, which include:

– I am Take That’s Personal assistant. (The two dancing ones are lovely, but that Gary Barlow – you have to watch out for him, he can be fierce, he likes his tea done a certain way!)

– I got down to the final twelve of the Sugababes audition when I was 15, but had to drop out at the last hurdle because of a sprained ankle (I couldn’t dance, you see – I was gutted)

– My grandfather is the playwright Alan Bennett (he gives amazing garden parties, apparently)

– I have four adopted children and am in the process of adopting another – Angelina Jolie is my absolute hero; in fact, my third daughter is CALLED Angelina

– I wrote well-known Hollywood film The Golden Compass. (I don’t know why The Golden Compass incidentally, I haven’t even seen it: just popped into my head! “Really?” The bloke opposite me says, “I thought that was written by a guy, Chris somebody.” “Oh, Hollywood’s so sexist they rename just about every female screenwriter.” I say: wow – almost busted.)

– Taking my lead from other fake BBC workers I’ve met on the train before, I now work for the BBC too… I work for BBC Wales and regularly have lunch with RTD and his cronies. What a shame I came across someone who really DOES lunch with RTD who declared she’d never seen me anywhere near BBC Wales, but wondered very loudly “if I was a writer.” When I confirmed I was, her stern expression vanished and a big smile spread across her face: “Knew it.” She said. “How?” I enquired. “‘Cosy you dress funny and lie, writers do that.” She declares. Question is, was she a big fat fibber too and calling MY bluff?? Lol.

So what’s the biggest, pointless, whopper you’ve told – on or off a train?