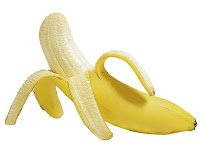 So this morning on the way back from take The Boy to school, I saw something I thought existed solely in comic books and cartoons: a guy, right across the road from me, slipped on a discarded banana skin.

His arms didn’t spin round and round; he didn’t skate on said banana skin; there was no cartoon exclamation marks over his head; there was not that comical *crash* sound. He simply fell over and muttered, “Bollocks.” Then he got up and skulked off, embarrassed. I wanted to say to him that it was only me who’d seen him and not to worry about it, but then realised I would likely embarrass him further by blogging about it, so didn’t say anything. It’s a cruel world.

This got me thinking – there are so many things you could NEVER put in a script because people would accuse you of stereotyping or general madness. Like the time when I was ten and bit into a spearmint chew – and it broke in half AND CUT MY CHIN OPEN. Or the time when the family cat Fidget jumped in through one of the small top windows and it shut on his tail, so he ended hanging by it and dislocating it in three places according to the vet. Or the time I put my then-five year old’s shoe on and he complained there was “something” in it – so I turned it upside down expecting a stone and a LIVE MOUSE FELL OUT and ran under the sofa.

What mad, real-life things have happened to you that you could never put in a script ‘cos no one would ever believe it?

19 thoughts on “Stranger Than Fiction”

previousNew Intro
nextSlightly Concerned I Am Now A Grown Up