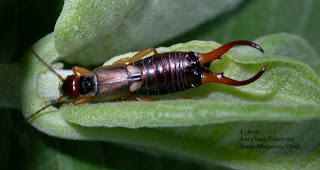 Why is an earwig called an earwig? Is it because they *can* live in ears? The reason I ask is because my son is sure there is one in his eardrum. I’m not too sure why he thinks this, especially since I have never seen an earwig in our house – or anywhere in the last eighteen years, now you mention it; not since I went to my mate Lucinda’s house when I was eleven and we watched her older brother Jay chop an earwig in half to see what would happen (it died, in case you were wondering).

Going back to my original point however, if there is indeed an earwig in my son’s eardrum, how did it get there? What does it want? I shone a torch in his ear to try and dissuade him of this notion but he reckons the earwig has (and I quote) “gone ballistic” in there now because it doesn’t like bright lights. I suggested we posted Lilirose’s Barbie ultracool (and super-small) shades in his ear too for next time, but he didn’t fancy it.

What it is to have imaginative children. In addition to earwigs in ears, Lilirose came home from nursery the other day and announced her keyworker JoJo “chopped her head off with scissors” (Lilirose’s that is, not JoJo’s). When I suggested this might be the tiniest of fibs given that Lilirose’s head is still very much on her shoulders, she said with great frustration, “You don’t understand, Mummy!!!”

Evidently. Two writers in the making, perhaps? In other news, my Husband had a dream last night of an alien-induced apocalypse happening here on Earth very soon. You heard it here first. This public information was brought to you by Bang2write.

10 thoughts on “Earwigs and Scissors”