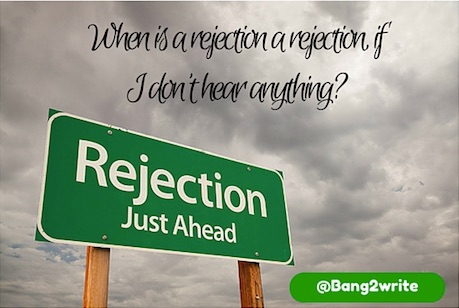 Not Hear Anything Back?

We all know rejection is a big fat NO, but very often writers don’t hear anything back at all. It shouldn’t happen, but it does. Here’s the mysterious Red Baron, who emailed me with this yesterday …

I’m new to the scriptwriting business and I was wondering whether you could give me some advice. Last April I sent a script to a production company. They replied back positively in May, asking for a series treatment, character biographies etc. Since June, I haven’t heard anything back from them.

From your experience, how long does it take for production companies to reply back and do you think I should ask them for an update, or by asking them would I be jeopardising my chances?

First off, I’m happy to offer my experiences, but they’re obviously just mine. Others will have different outlooks and opinions, even of the same prodcos and people I’ve dealt with.

Secondly, I think only stalking producers, sending them a dozen dead roses and killing their pets, friends and family jeopardises a writer’s chances. Asking for updates (as long as it’s not a barrage, but a politely worded email or phone call) is not unreasonable. It should never cause a decent prodco to chuck you in the rejection pile. If it does, you’re probably better off without them!

If it’s a VERY big prodco, agent or publisher, very often it takes a LONG time to hear back. Four to six  months seems average.  The BBC have taken anything up to 8 months with me, as have ITV and Granada. With one company, I waited a whole year only to be told in no uncertain terms to get lost: damn!

Middle-sized companies may take less time. This can be good OR bad. One prodco asked me to write some pitches and responded favourably … Then they talked to me on the phone for a WHOLE HOUR, asked me to call back on the Friday. No problem, except they then dodged my call and never spoke to me again. That was really annoying. I’d have rather had radio silence before I did all that work! Oh, well.

Small companies I’ve found either respond IMMEDIATELY (literally within days) or never speak to you.

Sometimes, you don’t hear back because the person you were dealing with has moved on or been fired. That can also be annoying, ‘cos the replacement does not always want to follow up what their predeccessor was doing. Some even make a point of starting with a completely new list of potential projects.

When this happens, a politely worded query will tell you what you want to know. I find usually they will often reply in a very polite manner wishing you ‘all the best for your future’ or similar. In other words, get lost.

Other times, unexpected things happen. I had a great meeting with a producer once. He followed it up with several emails, really enthusiastic … Then complete radio silence. I was miffed but moved on … Only to hear about a month after that! He said he had been REALLY ILL, but was okay now. Could we pick up where we left off? Okay!

Also, very early in my career I was talking to an agent who seemed to love my work. Abruptly, he disappeared off the face of the planet. It was only a couple of years ago I discovered the poor man had actually DIED very suddenly. Yikes. 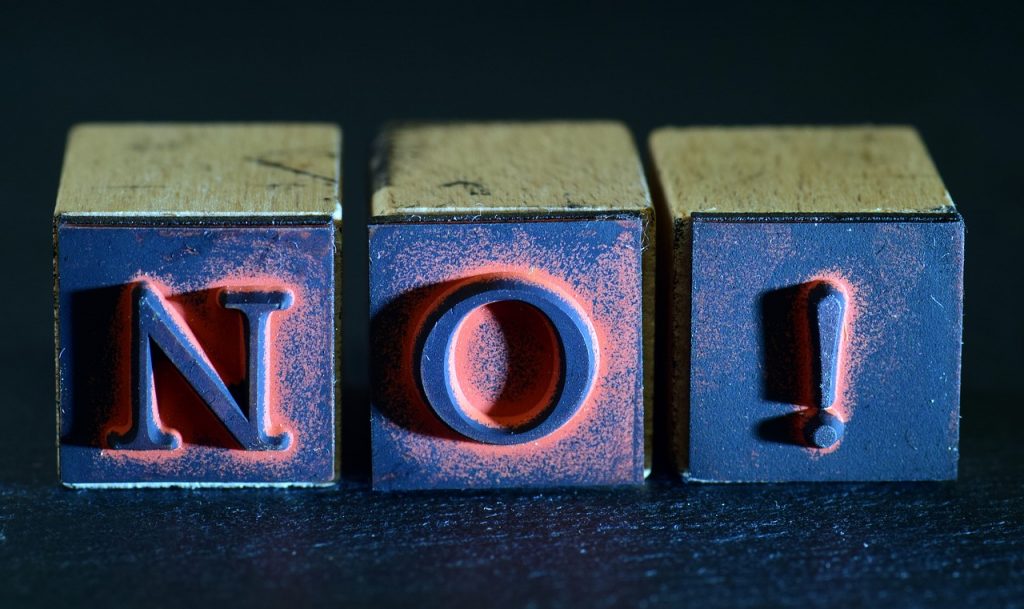 So try not worry about getting radio silence. It happens. It shouldn’t, but it’s a lot easier to say nothing than NO. Sadly, too many writers have made epic nuisances of themselves over the years when they get rejected. Harsh but true.

Only worry if you get CONSISTENT radio silence (ie. no one ever replies and you never hear ANYTHING). That means you probably need to do something about your querying/writing.

Also, don’t worry about following up on the progress of your submissions. It is your right to do this. I find phone calls work better than emails. Write a phone script if you feel nervous. Chances are someone’s assistant will just take a message anyway (remember to leave your email address or phone number so they can get back to you). If no one gets back to you, there’s your answer.

I wouldn’t phone more than twice and I wouldn’t email more than about twice either. I usually phone once and email once and then let it go.

Having said that, some of my best opportunities have come from NOT letting it go for one reason or another  … just don’t bombard them with demands! Leave plenty of time between communications, else you run the risk of said person opening their inbox and going, “Them AGAIN!” Not good.

BY THE WAY – Just because you’ve been rejected once, doesn’t mean you can’t approach that person again. Some of my best contacts now have come from my repeated approaches! Something like:

“Hi, you may remember my script [blah] last year/ six months ago/etc, it was about [blah]. You passed, but you said [blah] about it. I was wondering if you’d like to read another script of mine?”

I find they will often say yes. That doesn’t mean they’ll take the next send of course, but you’re building up a profile in their head. This IS good, because you are creating a relationship!

Truth 👏✅️🥳Yeeeeeeaaaars ago I went to a seminar and the speaker said, 'You are the same as the 5 people you associate with most.' This really made me think ...🤔 About who I was hanging out with🤔 What they said and did 🤔 Whether I agreed with them 🤔 What they brought to my life🤔 If they stuck by me in bad times 🤔 Whether they were happy or resentful if I was successful I soon came to the conclusion many of the people I knew, their beliefs/ behaviours and how they related to me did not help me in any way. Some were family members!! This made me resolve to find other people who had the same passions as me; who had ambitions; who celebrated others' wins as well as their own, plus they commiserated when things were bad. You don't have to cut people off (though you probably should if they're toxic AF and/or abusive). But DO evaluate who you spend your most time with ... and find those who share your dreams and fire you up. Don't let the invisible influence of negativity weigh you down. For more FREE writing help 👇www.bang2write.com/resources 🔗sgrstk:Your life works like an algorithm: the more attention you give something, the more it appears in your life. Consider this when deciding to focus on dumb shit like drama, gossip, and negative people. ... See MoreSee Less

Another #B2Wreviews ✅️Outsiders is a TV series that ran for 2 seasons in 2016-2017 by the WGN channel. Set in Kentucky, the series tells the story of the 'hillbilly' Farrell clan living off the land in the Appalachian mountains above the fictional town of Blackburg. The first series starts with 'Big Coal' wanting to evict the Farrells off the mountain, with some Blackburg residents wanting the 'yokels' off the land too and others siding with them. The first series is SO good - a real 5 star watch imo. It follows the fates of Asa 'the returned one' - he left the Farrels 9 years ago and has come back home, bringing talk of prophecy with him and struggles for power. The storyworld is fascinating, such as the clan's own language ('Ged gedyah!'). There is some beautiful mythical storytelling, making this season feel like a bad dream: the spirits of the mountain - symbolised in the wolves - plus the Farrells' dead ghost children converge on the clan, putting Asa and the others at war for the crown as 'Brennin' (chief). Yet as soon as this storyline comes to its DEVASTATING fruition (and omg!!!! What an ending!!!), the series falls apart. Season 2 is super-weak in comparison, going against all the various rules of its own storyworld. That's not to say it's not worth watching - the Sheriff Wade is a fantastic and unusual male character who does his level best at holding it together - but it's just not the same because characters seem to do stuff that is wildly out of character ... In short the set ups and pay offs just don't match. A real shame. However, if you enjoyed shows such as SONS OF ANARCHY and JUSTIFIED, you will enjoy OUTSIDERS. Bangers in the UK can catch it on the FreeVee channel. Enjoy! ... See MoreSee Less

One day this livestream thing will not fox me! 😆😆😆 Dang thing lied to me, said it wasn't working when it was. Tsk!Here we have a GREAT chat with horror maestro Stephen Volk talking about writing short stories, favourite horror movies, screenwriting, catharsis, horror tips and much more. Enjoy! ... See MoreSee Less

⚠️ NEW POST ALERT ⚠️ Are you making any of THESE mistakes marketing your book?? Better check and see!!! 👇👇👇bang2write.com/2022/09/10-common-mistakes-people-make-marketing-their-book-you-should-avoid.html ... See MoreSee Less

All about Genre ... 🤔If you're on Twitter, you'll know The Twitterati have been discussing the differences between Sci Fi & Fantasy for the past few days - the good, bad and even absurd. It didn't take long before the conversation turned to marginalised characters in Sci Fi and Fantasy 🧝‍♀️🧝‍♂️👨‍🚀🚀It's extraordinary how both genres STILL tend to put female, BIPOC, LGBTQ and disabled characters to the fringes ... and even when they ARE in them, how the Dudeflakes and general idiots think these characters 'shouldn't' be in the story 🤬For more on how to be inclusive in YOUR writing, check out the B2W book 'Writing Diverse Characters For Fiction, TV or Film' 👇👇👇myBook.to/diversecharacters 🔗OMaraRules: Sci fi is when men think it's unrealistic a woman can fly a ship and fantasy is when they are mad she can use a sword. writersrepublic: Fantasy is when you pretend Black ppl didn't exist in the past and sci-fi is when you pretend Black people won't exist in the future. Bang2write: Fantasy is when writers pretend it's 'realistic' to subject sexual violence on their female characters alongside dragons.Sci Fi is when writers write a single Girl Character alongside an ensemble of highly differentiated men. Fantasy is when there are no queers in the land because to include one is 'sexualising' the story.Sci Fi is when queers are talked about in the press junkets by the actors playing them but you go to the movie and discover it's ALL subtext. Sci Fi is when a disabled character hates being disabled so much he becomes a mad scientist to cure himself.Fantasy is when there are NO disabled characters. Period.#instagood #instagram #writers #insta #movies #writing #writinglife #tv #screenwriter #screenwriting #screenplay #writingcommunity #bang2writers #authorsofinstagram #bang2write #novelist #writersofinstagram #writinginspiration #authors #author #writer ... See MoreSee Less