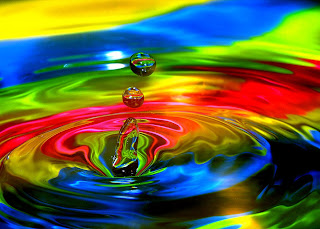 Technicolor, a feature by Martin Adams is a particularly interesting project for me, not only because I have been script editing it on London Metropolitan University’s Metlab course, but because it originally came to me as a short film script well over a year ago.

Martin is a particularly able short film writer – it’s a style I have never mastered myself (I find it difficult to think “small” enough, if that makes sense) – and when Technicolor first came through the doors of Bang2write, it was approximately ten minutes long. The tale of a man haunted by the ghost of a forgotten, dead silent movie star, it was interesting but fairly typical of the sort of supernatural-style shorts a reader sees. Basically, it didn’t stand out particularly to me, but though it obviously had its problems, it was a very good, very well-rounded, short – perfect fodder for the BSSC, I thought. I was unsurprised then when it reached the semi finals of last year’s contest, along with another of Martin’s offerings, The Gibbet, which I had also read for him.

I thought that was the last I would see of Technicolor: Martin is very prolific and seems to rocket through his shorts projects. So you can bet I was surprised when John Sweeney of Metlab contacted me with the short list of those chosen for Metlab – and there was Martin’s name, plus Technicolor as a one page pitch doc for a feature! I don’t mind admitting I was a little dubious. Could Martin really re-imagine Technicolor “big” enough for the big screen?

The first thing Metlabbers had to do was an exploratory draft. They had roughly three months or so to churn *something* out which John and I could then work through not only on a creative basis, but also from a practical, business-based model. The exploratory drafts came in… And though Martin’s draft passed from a business point of view – it fit all John’s pointers exactly – from a creative view, well: it didn’t pass muster. Characters were somewhat cliched (especially the women), the structure was lumpy, dialogue was average. The story itself didn’t seem to go “far” enough – it hinted at so much, but revealed little.

I took a few deep breaths.

However, Martin had similar misgivings. Upon starting Technicolor, he said he hadn’t watched many supernatural thrillers: he wasn’t sure then of covention, or where the line could be crossed between convention and cliche. Similarly, he wasn’t too sure of his characters’ motivations, particularly that of his antagonist. What did she want? Was she even the one at the heart of this? What did our protagonist achieve over the course of this film, why did he reject his family for her? Who else could be in this film, add to our protagonist’s journey?

The first thing Martin needed to do was watch more supernatural thrillers. When it comes to genre, it makes no sense at all NOT to know what has come before. Similarly, he needed to work on his two main characters – and a meeting with John Sweeney revealed some curious thoughts on his behalf on what the antagonist’s motivation should be: necrophilia! Once we locked John Sweeney in a cupboard with the help of the lovely Chip (not really), we decided that the next draft should be a character draft, with a particularly emphasis on the journey of this unlikely couple.

So the next draft came in – and yes, it was 475% better. There was much clearer motivation on behalf of the antagonist and protagonist now – and there seemed more of a focus to this story. Martin had been watching Stir of Echoes a lot, a very much underrated David Koepp film – and it showed. It was a little TOO like Stir of Echoes at this juncture. But that was okay, because it gave Martin a basis from which to work from: keep the good Stir-of-Echoes stuff that wasn’t story-specific, whilst stripping away all the stuff that was the same. A good place to be.

So Martin went away again with more feedback from me and to all intents and purposes, completely re-imagined the plotline. Taking it away from its mystery element on what had happened in the past (which had caused considerable confusion), Martin created more of a detective slant – and this really worked. His protagonist Craig, a journalist, investigates his own father, now an aged movie star, whom he suspects is involved in the disappearance of a young girl thirty years’ previously. When Craig’s father is mysteriously murdered, Craig must discover who his killer is -and how and why it is linked to that girl from the past, bringing devastating consequences for Craig and his wife and child.

Technicolor still has a while to go before it is ready to pitch: Martin’s female characters tend to be a little under developed, so his secondary women like Craig’s wife could do with a tweak, as can “helper” Becky. Similarly, the resolution itself could do with a little less exposition to aid dramatic satisfaction. However I am certain Martin can achieve this, for Technicolor is an exemplary example of a scribe putting ego to one side and listening to feedback, creating and recreating his plot from the bottom up where necessary. Martin really has done the best for his story and it shows in Technicolor.

previousWHO – WHAT – WHERE – WHEN – WHY?
nextI’m Going To Kill You All