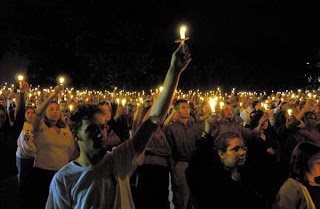 Caroline first approached me last October, so she’s been a confirmed Bang2writer for almost a year. She told me she had come to writing later in life, having had all the commitments of marriage, family and work first – but it had always been something she wanted to do. Having had no formal training in creative writing, Caroline wisely wanted to “work her way up” through the basics of screenwriting by first attempting some shorts, then longer scripts, then eventually a feature – and of course I was happy to assist her.

Caroline first sent me two shorts, VOLUPTUA and THE VIGIL. Voluptua was a fun piece about a homely woman earning a living via stripping off in front of webcams for pervs round the world, but it was The Vigil that really caught my attention. The story of one woman’s fight to learn the truth about her missing son in a dystopian future Sheffield, it was one of the scripts that had real heart. Its message clearly meant something to Caroline and by that same token, she had communicated that meaning very obviously to me, her reader.

Of course, the first ever draft of The Vigil was rather rough round the edges. There were some classic format errors to address, learnt from Caroline reading shooting scripts and transcripts on the internet. There was also some rather heavy scene description, that prescribed what characters were physically doing to the very last detail that conversely neglected arena – a must for a script set in a future world. Lastly, most problematic in this draft was an expositional rant on behalf of the main character Eileen.

I sent off Caroline’s feedback, wondering how she would react. In my experience, new writers sometimes feel very daunted when told their script needs work and can feel very upset with the prospect of starting the piece over, with more technical stuff in mind. Yet Caroline was one of the rare breed of any writers that soaks up feedback without being a slave to it: as The Vigil progressed, whilst I saw many of my ideas implemented, I saw just as many solutions of Caroline’s own making.

By the time I had read The Vigil at least four times, firing off feedback and answering Caroline’s questions and brainstorming with her, there was a significant improvement to it. She achieved a sense of hopelessness in the arena towards the beginning of the script which changed its dramatic context as Eileen became stronger in spirit over its eight pages. Eileen’s daughter Leila grew from a two-dimensional secondary character to an organic part of the story, so that the two women spoke with sublime subtext. Last of all, the addition of a new character and the contrasting of two Guards in Sheffield’s ominous “Gated Zone” meant that was no longer the good/bad/black/white element there was before, but something more subtle, a real shade of grey.

But most of all, Caroline never lost that sense of heart through all the drafts of The Vigil I saw. And it’s that, beyond craft, that made it one of my faves.
——————————————————————-
THE VIGIL is currently through the first round of The British Short Screenplay Competition. If you’re a producer or filmmaker who would like to read The Vigil, please contact Caroline direct on caroline”at”liberty1789″dot”demon”dot”co”dot”uk.

2 thoughts on “Specs I’ve Seen # 2: The Vigil By Caroline Henry”