Know Your Enemy (But Don’t Know Too Much) 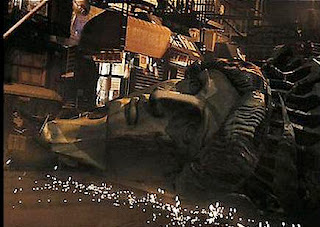 I get a lot of creature features through the doors of Bang2write. And that’s good, ‘cos as we all know, I love a bit of gore and general people-eating. But they do generally share one basic flaw in common and it’s this: the writers concerned always try and explain where the creature has come from.

So why is this a problem? Well, like all screenwriting stuff, it needn’t be. After all, there have been creature features that tell us exactly how the monsters have come about and they’ve been enjoyable. The underrated Deep Blue Sea for example tells us exactly why the sharks are insanely smart: they’ve been genetically modified by scientists searching for a cure for Altzeihmer’s. But crucially, that’s it. We don’t know exactly how the scientists have done this – and what’s more, we don’t actually care. We just want to see clever sharks going after people in flooded rooms and chopping them into bits. Similarly, in Pitch Black the creatures are actually indigenous to the planet the survivors have crashed on, with the HUMANS being the actual aliens. Nice turnaround. How the creatures got there in the first place, how they evolved, why they can survive for 22 years without human flesh – don’t care. We just want to see people eaten, thanks very much.

The problem often with the specs I see is that they try and explain TOO MUCH where the creature has come from; they literally blind the reader with science. Radiation and nuclear waste monsters remain a firm favourite, as do creatures summoned by spells or looked after by creepy villagers as a result of some curse or fairy tale. Again, no reason why these stories shouldn’t work, but often they’re so heavy on the exposition of HOW, they don’t deal enough with NOW: in other words, we end up not caring about the characters or why they should survive.

Looking at the evidence, there are far more films in which we have no idea where the creature has come from – and we STILL don’t care, we still just want to see people get eaten. Consider the fabulous Cloverfield: we barely see the creatures but for snatched moments of video footage. Hudd’s hysterical theorising about where the creatures come from adds to the drama: who wouldn’t be wondering about this, but similarly we know exactly what his friends mean when they snap, “Does it matter??” Knowing LESS actually ADDS to the movie, makes it more scary, like a bad dream.

In Predator, the creature lands in the jungle with the intention of hunting man – and happens to bump into Arnie and his mates. That’s it. Again in Alien, the creatures are non-indigenous, but where do they come from? Well the big fossilised creatures in *that* spaceship brought them with them of course, but what the hell were THEY? Once more: who cares?! Let’s have some chest bursting and general clawing, shredding and screaming please.

Similarly, Rhonda’s role in Tremors is added to by the fact she’s a geologist – who STILL has no idea what these seemingly prehistoric beasts are. Her theories, along with Val and Earl’s while they’re stuck on the rock in the desert again adds to the drama. End of the day, they have huge underground beasts with long tongues trying to eat them. That’s the problem they need to overcome, not trying to crack where the monsters come from.

Creature features are very often symbolic films: aliens in particular can be symbolic of conflict with other cultures, though they have also told of people’s preoccupation with health and infection too. Bogeyman-style creatures are childhood favourites that can tell of our fear that we will become helpless as a child again, unable to control our own futures. Vampires were originally conceived by the Victorians as a violating creature, for sex was taboo: similarly werewolves were symbolic of the kind of brute strength that cannot be negotiated with.

But creature features are not scientific films. Though they may flirt with science, they are by their very nature simple: there is a creature. It will kill you. Most of the time generally it’s kill-or-be-killed and the resolution will end with self sacrifice and/or a huge great big explosion. Other times, like in Cloverfield, the characters will simply die (they’re unable to do anything else), yet the story will be all the more powerful for it.

So: over to you – favourite creature features, least favourite? Why?