It’s hard to believe that Alien will be thirty years old next year. Barring a few special F/X and props, I think it still looks better than some movies produced only ten or fifteen years ago and story-wise it is still one of my faves. Here’s my tongue-in-cheek look at some of the elements that make up this great film and how they might be viewed from today’s perspective by a (totally barking) script reader… 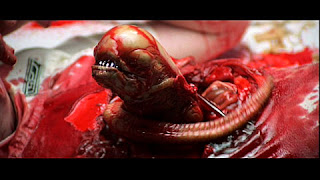 The first thing that really jumps out at me is the fact these characters seem really larger than life. All of them have unlikable traits, none of them really strike me as the “hero” type, even sole survivor Ripley. In short, it’s as if they’re TOO real – I don’t have any trouble imagining coming across any of these guys, with their 3D problems and prejudices. Is there any way we can make them a little less “gritty” and make them a bit more movie-like, something for the audience to aspire to: tougher, not as scared, with less bickering amongst themselves? After all, these characters are used to travelling together, surely? Would they really be reduced to school-like exchanges and petty squabbling? They’re adults for God’s sake.

Similarly, I wonder if anyone here could be better looking – especially the women. There’s not even any mention of whether they wear make-up, let alone their cup sizes. I like the fact Ripley strips to her underwear however when faced with the creature in the resolution – but don’t think this goes far enough. What if she was the type of girl who likes to wear sexy lingerie under her boring boiler suit, just like many women do under their office clothes in reality? Whilst we’re on the subject of appearances too, the actual spaceship seemed a little too grim to me. I would have liked more polished chrome and steel. Similarly I would have preferred the characters to curse and smoke less, for it just made them appear uncouth when surely they have had to study very academic-based subjects like astro-physics to go into space, just like our current astronauts?

Secondly, another troublesome factor for me is that for the first forty minutes approximately, nothing much happens! As nice as it is to establish the story, its scenario, characters & arena, plus the characters’ predicament meaning they are forced to land on The Forbidden Planet, the story doesn’t really get going as far as I’m concerned until the Facehugger attaches itself to Kane. What if the movie started at this moment? Open movie – big egg – creature jumps out – POW! In his face… Better still, why not start with the chest bursting sequence! We could really go to town with the CGI on that, plus it would have the added bonus of distracting the audience of how the chestburst actually came about story-wise. Perhaps Ripley could mention something about it when Dallas goes into the vent later (like that by the way, keep that); something like, “Wow, what bad luck Kane brought a chestbursting alien on board from that horrible planet we landed on earlier” should do it. Better than that, obviously; you’re the writer. 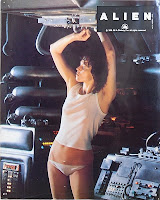 The second suspension of disbelief issue I had concerns the actual creature. Considering the crew of The Nostromo don’t exactly keep quiet after the alien has grown large – they’re yelling at each other, screaming, sounding alarms and setting fire to homicidal robots – how come Parker, Lambert and Ripley have so much time to decide to blow up the ship AND collect fuel? Surely the creature could have picked them all off very easily, yet after dispatching Lambert and Parker in the cargo hold, the alien decides to simply go for a nice walk up and down the corridors. What’s more, despite running directly into the path of the creature, Ripley is able to retreat simply because the alien is more interested in Jones, the cat. This seemed unlikely to me – when faced with a sausage on a stick or a prime steak, which are you going to choose? When I discovered that the alien didn’t even eat the cat, frankly I was disappointed.

Finally, one definite change I would consider is to the ending – I think it would be far more interesting if, instead of hiding in the shuttle, the alien waits by the doorway and ambushes Ripley on the way in. Ripley dying – and that bloody cat! – is something the audience would never expect. And it’s not like Ripley’s shelf life will be extendable anyway – nice as she is, she IS a woman and everyone knows female protagonists are not really in demand these days in anything other than secondary roles, especially those where they can be raped or killed, preferably both… Right?