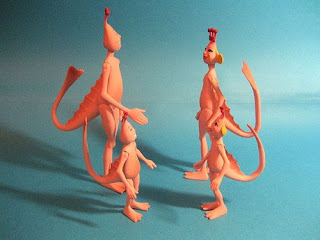 So I went to Gordy Hoffman’s Bluecat Workshop at the weekend – many notes to follow later this week, despite the fact that at approximately 3pm I suddenly got the DREADED LURGEE and starting sneezing like some kind of Snuffelufagas. (Very attractive: I blame Kevin Lehane, personally – he was looking dodgy if you ask me; I’m sure he brought some Irish germs with him). But anyway, even though I attended only the Saturday (it was a two day thing), it was very informative and fun. And Gordy’s a great guy. But hell, you knew that.

The fact that I have a horrible cold means I am ill on my birthday – today! How wrong is that? Even more wrong: there’s just one last year of my twenties left now, *sigh*. Then I’ll be as doomed as the rest of 90% of you bloggers out there, just waiting to die… What do you do to cope? I’m thinking about learning to knit, I was given the slippers today FFS. More worrying was the fact I put them on and said, “Aaaah, that feels nice…” Yikes.

And finally: I returned from London yesterday to discover there has been a MASSACRE at my house – Crampon-Fred, the cat, has been drinking sea monkeys right out of their bowl (the boy hadn’t put the lid back on). Noooooooooooooooo… Both kids were suitably freaked out, though more freaky was the girl’s idea that we could simply cut open said cat and retrieve them. She is her father’s daughter.