If you grew up in the 90s like me, then you heard the words ‘girl power’ A LOT. Now, writers will often tell me they have a ‘strong female character’ or a ‘feminist’ story in their spec screenplay or their unpublished novel. This is cool, but it rarely works out this way – in fact, there are LOADS of female character traps writers can fall into. Supersadface.

But at grass roots level, very often the biggest issue is writers are simply TRYING TOO HARD. It’s all very well trying to appeal to femcrit bloggers or reviewers, but the reality is, those peeps are NEVER happy. Don’t believe me? Check out the Google search results for ‘Max Max Fury Road Feminist’, I’ll wait here …

… Oh hai! You’re back. I bet that was fun, right? 300K+ results and no one can agree whether it’s feminist or not. But simply: WHO CARES. What we want is a brilliant STORY, not a box-ticking exercise or female characters jammed in for the sake of it.

But the fact remains, we live in a male-dominated world … and we frequently view stories through that lens. Now, not all stories need what I call ‘GIRL POWER’ (even those with female leads!), but it can help us as writers — especially if we want to stand out in that mountainous spec pile. Here’s 3 ways on how to do this. Enjoy! 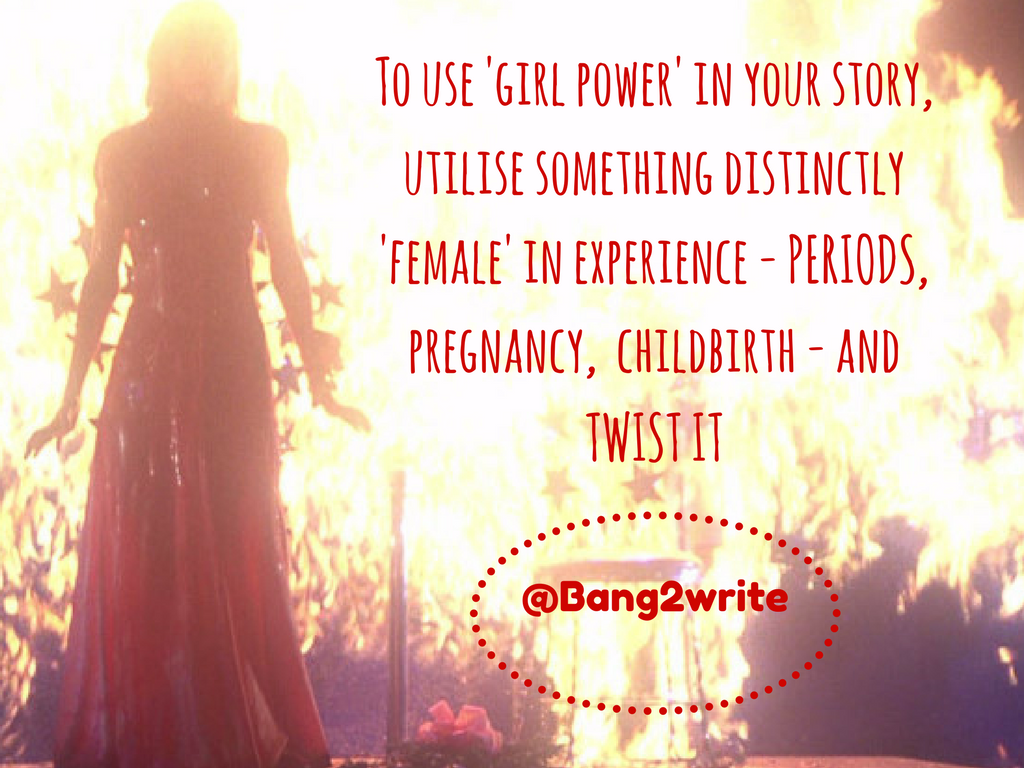 Now, let me be the first to say, ‘personality first, gender second’ BUT there are certain experiences those born female may have in their lives that male-borns probably won’t.

The most obvious (but not limited to) are periods, pregnancy and childbirth. We’ve seen some great stories placed around these elements, my favourite being Carrie by Stephen King. A story of puberty and ‘growing away’ from parents, not to mention finding your place in the hostile world of high school and relationships, it’s no accident Carrie’s telekinesis is linked to her started her period; nor is it that she ends the story drenched in blood.

I was a teenager when I read this book and I was BLOWN AWAY by King’s insight into growing up as a teen girl, so you don’t have to be female to do this. Anyone can grasp the ‘female view’ – but you have to be prepared to research. Even if you are female yourself, don’t rely on your sole experience. Two heads – or more – are always better than ONE! MORE: 5 Problems With Female Leads 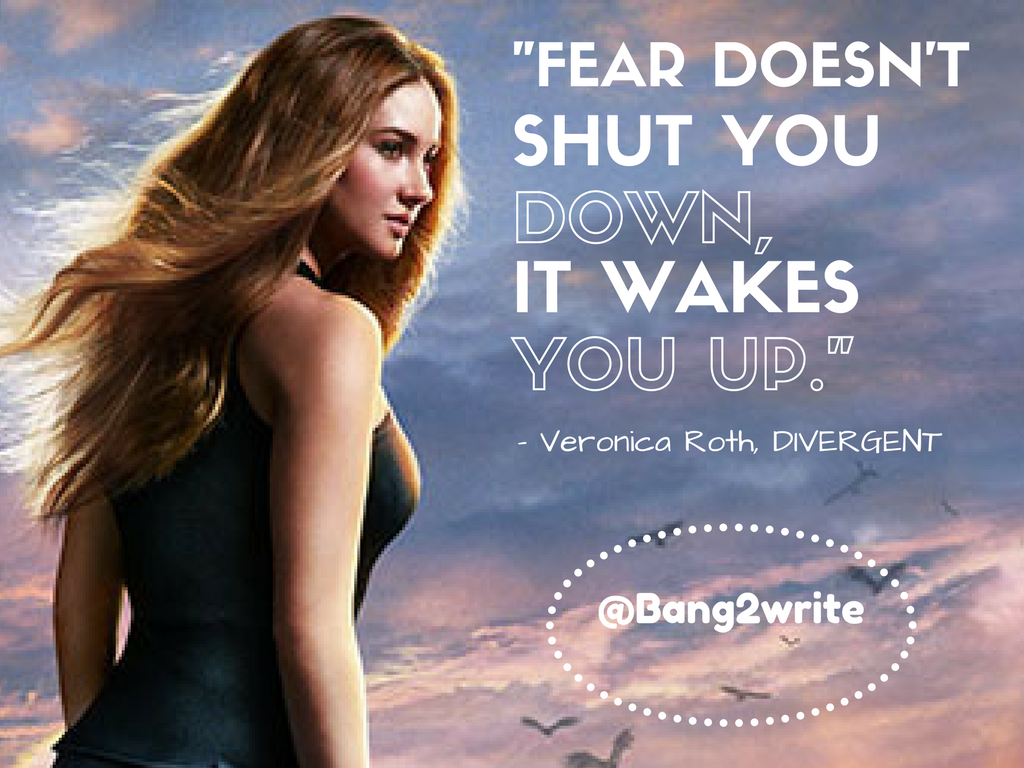 This is the element most favoured by the industry and spec writers alike – simply place a female in what we perceive as the male’s place, traditionally: in other words, have a female lead, instead.

There once was a time, not so long ago, when gender flips on their own worked. We’d been so used to seeing a man, ANY female lead seemed ‘fresh’. This was most obvious in the cases of Kickass Hotties like Celine (the UNDERWORLD franchise) and Alice (the RESIDENT EVIL franchise). Now, I enjoy both of these characters, they’re iconic and cool and look fabulous. But they’re not well-written, any more than any MALE kickass hottie. They are simply ‘the female equivalent’. And why not.

But things have started to change in the last five or six years. A straight gender flip is no longer that effective. Now, audiences demand something ‘more’ to our female leads, so even Kickass Hotties have to have better back stories and motivations.

This is why I liked DIVERGENT so much. Tris is not ‘unique’ … She is not the only divergent in the actual story, so we’re not mining the ‘Chosen One’ trope, which I personally find incredibly boring. However, it is still her story. This is refreshing.

What’s more, Tris is kickass: she’s fearless, literally Dauntless, as her new faction demands. However, she also has what we would assume are ‘feminine’ qualities too, coming from her original tribe, Abnegation.

Tris is true to herself, too. Though she must literally abandon her family to join Dauntless in order to strike out on her own as an adult, her first tattoo is of three birds in tribute to her parents and brother. She shows love and compassion to herself, her colleagues and the world.

Lastly, what I liked most is Tris is mentally capable. She is not just brave, she can deal with her own fear. This is not a ‘female’ quality, but rather a human one – BUT this is something we don’t often associate with female characters, which is why the gender flip here is so interesting. MORE: Book Versus Film – 8 Reasons Why DIVERGENT Works As Both

3) Inject Girl Power into your Storyworld 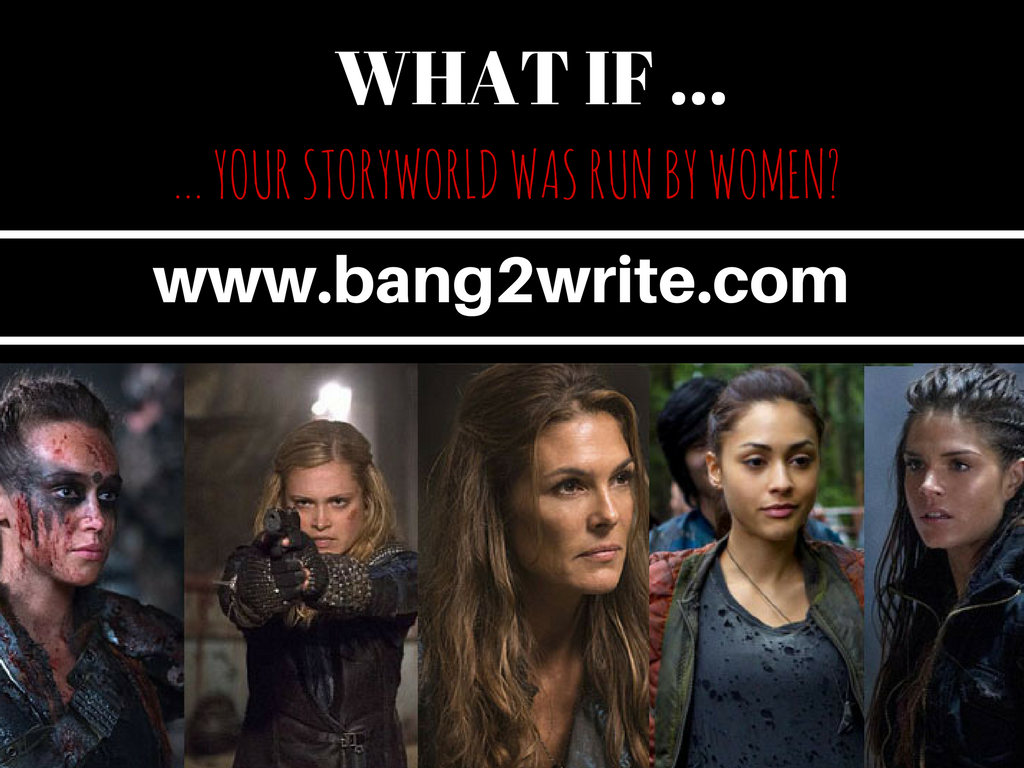 As mentioned at the beginning of this article, we live in a male-dominated world … And as a result, MOST writers will reflect that in their writing.

Sometimes, it’s called for – in a story in which a female character is ‘up against it’, it might be a good idea to show how the storyworld is against her, too. A writer may want to ISOLATE her literally and symbolically, showing one female character and lots of male ones.

However, this can be overdone. In MAD MAX FURY ROAD, the storyworld is highly male-dominated, yet with Furiosa and The Wives, that’s a whopping SIX female characters at the heart of the story (and that’s before you count The Action Grannies!). Immediately, the high number of females in the cast makes it feel ‘fresh’.

However, writers can go ONE FURTHER. In TV show The 100 – in earlier series at least – the characters live in a matriarchy. The female characters are IN CHARGE. Whether highly-educated Skypeople, tribal Grounder warriors, or digital killer computer holograms, female characters DRIVE this storyworld and nothing can happen without their say-so.

Now, writers don’t have to have to have LITERAL matriarchies like The 100 (though there’s absolutely no reason you can’t), but what if your female characters RUN your storyworld? This might be mean you have an all-female cast; or it might mean women take up the significant main role functions, with men relegated to lesser ones (for once!). Why not? What could you lose/gain from flipping it like this? MORE: The 1 Gender Swap That Could Make All The Difference In Your Story

2 Responses to How To Use Girl Power In Your Story