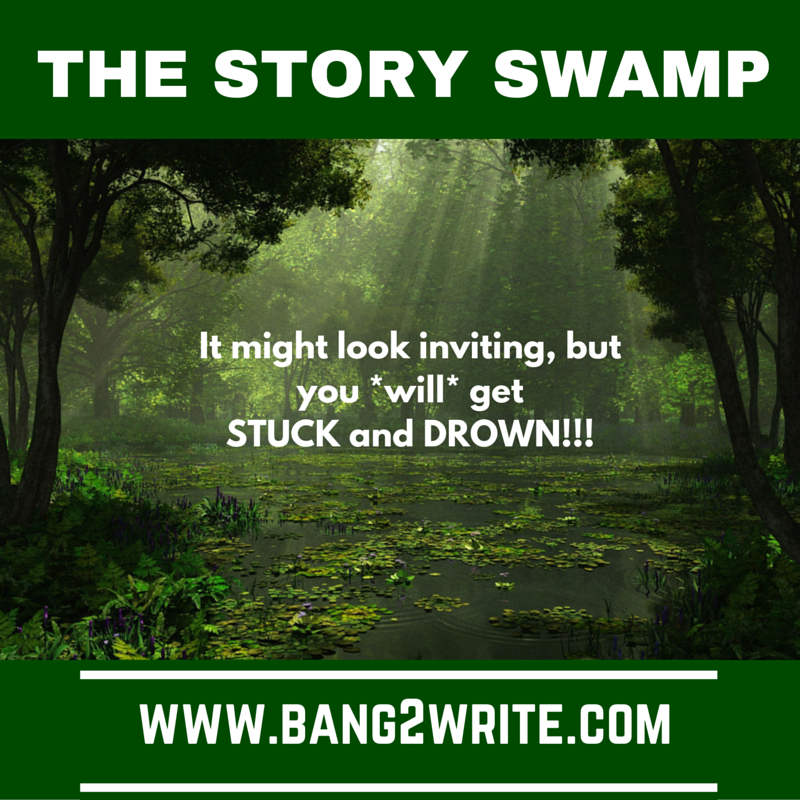 I’ve worked with a lot of writers

I get it, I really do

There’s something quite thrilling about writing by the seat-of-your-pants. I’ve had various Bang2writers describe it as being akin to having “no safety rope” and I like that analogy; it feels like that to me, too. Sometimes, especially when you feel blocked or uncertain, throwing caution to the wind can work FOR your writing. It can help “crack” the elements of the story of characters you’re having trouble with.

Time is NOT running out

Lots of writers who want to dive into a draft confess to thinking “time is running out”.  But it’s not. Panic kills creativity. What’s more, here’s the irony: the more you PLAN, the quicker you’ll FINISH!!

I call it “The Story Swamp”

I’ve seen so many writers flounder in half-baked concepts and screwed up, samey stories now … Yet those who’ve resisted temptation to dive straight in have ADVANCED through their drafts and out the other side to their next one … What’s more, those well-thought-out drafts have got them stuff (options, credits, places on schemes and initiatives) the ones stuck in the “story swamp” could only dream about.

Research is the key

When I say “research”, so many writers shudder. I see them balk at the idea, as if research is the killer of all spontaneity. But it’s not! It can even ADD to your creativity.

NEWSFLASH: No one can make a “new take” on “whatever” if they don’t know what came before.

I can’t tell you how many times I’ve been pitched and it goes *something like* this:

ME: Okay, sounds interesting. How is it different to [ X MOVIE/TV SHOW ]?

WRITER: Oh, I haven’t seen it.

ME: But how do you know?

Bear in mind, 9/10 the movies or TV shows I’m most likely mentioning are *mainstream* – they’re not difficult to get hold of, read about and compare.

As a result, this lack of research not only means the writer in question is exposed as not being prepared, s/he has a stronger than average chance of simply rehashing a story ALREADY told, precisely what no one wants. This is why research is KEY.

Look, it doesn’t matter *how* you plan

Here’s how I do it: I make copious notes in a dedicated notebook. I read craft articles online. I look at sales and marketing trends; I ask the industry people around me what they want to see more of, or less of. I think about stuff *I* like – and dislike. I ask others their own preferences.

I think about the types of themes, ideas and characters I am interested in – then I read books and watch movies with them in. I see what I think worked well and what I think didn’t. I think about how I might have approached the same idea and see what comes out of that.

And NO, I don’t force anything to come to the surface. Why should I?

After this stage, I may take to the computer. I might write a a short 20-40 word pitch and/or a one pager in the first instance, followed by a 2 or three page “short story” version, then build it up from there.

But remember – there’s no “industry standard” to this sort of thing. Do whatever works for you.

But you WILL regret not planning

Trust me, I’ve had to deal with the fallout from writers not planning more times than I care to count. Many of them never recover. They end up junking their projects that could otherwise have worked. They end up demoralised. Some even quit writing altogether.

In the very least, NOT planning will add to the length of your project writing time by at least 50%. And who has time to spare??

You will have a bombproof central concept

You will be able to target your pitches better

You will FINISH FASTER!

6 thoughts on “On Writing: Why Planning Beats Seat-Of-Your-Pants Every Time”