A Tale Of 2 Scientists: How Contrast In Characterisation Works

Action/Adventure is one of my favourite genres of Hollywood movies (sci fi or not), and it would appear Bang2writers share this love too, because I get a LOT of spec screenplays in this type of vein, especially dealing with such issues as extreme weather or climate issues; giant monsters or meteorites; sometimes all of these things and more. And why the hell not? If you like this type of movie – and I do – it’s a great way of showcasing how BIG you can think as a writer AND deliver. What’s not to like???

Now I’m a big fan of the movie PACIFIC RIM, as I’ve written before. But far be it a so-called “guilty pleasure”, I think it’s actually written WELL in terms of characterisation and I’m going to explain why. Plus, apparently it was a spec. But first, the obligatory disclaimers to keep keyboard warriors off my back. So, if:

… Action/Adventure or PACIFIC RIM is the kind of movie you DON’T like?

… Or you want to go on and on (and on and on) about Mako Mori being the ONLY female character? (Go HERE instead, seriously, PLEASE – Ta).

… Or you want to accuse me of being a “Del Toro apologist” like last time (cuz oooh yeah, entertaining millions of people is a BAD THING apparently)?

Then seriously, move along peeps, NOTHING TO SEE HERE. You won’t like this post. Uh-uh. You have been warned … off you go. Thanks!

Right. Aaaah the rest of you are still here, great.

So, let’s put characterisation in PACIFIC RIM under the microscope … but probably not for the reasons you’ve thought about already and let’s face it, half the interwebs already because it’s just far TOO EASY to slag off stuff in general, it really is the past time of the moment!.

Instead, for me, I think what’s most interesting in Travis Beacham’s writing in PACIFIC RIM is not the vulnerability (note: NOT self pity) in the main “hero” Raleigh (though that is indeed, interesting); nor is it the authoritative and sometimes wry comebacks of main man Pentecost; nor is it the fact Mako is strong, clever and layered without ever once being sassy or sexualised; nor is it the somewhat tortured observations of Herc about his son (and antagonistic force) Chuck … AND it’s not even the comedic value of peripheral characters like Hannibal Chau (which by the way even after several viewings is still funny ‘cos you JUST KNOW what’s coming).

No, what keeps me watching this movie is the two secondary characters of Gottleib and Newton (aka Newt, nice ALIENS ref there AND a science one, double impact RESPEC’).

Both scientists then, both Gottleib and Newt are very obvious embodiments of not only scientific principles (Gottleib is a physicist; Newt a biologist) but more importantly, emotional principles: raging versus easy-going; uptight versus free spirit; introvert versus extrovert; English versus American; restrained versus flamboyant … Even old versus new, because Gottleib represents the traditional model of science, whereas Newt gets down and dirty, who acts not only as the cool brainiac, but the voice of the audience, too: “Numbers are the closest we can get to the handwriting of GOD!” / “Dude, what?!?!”). 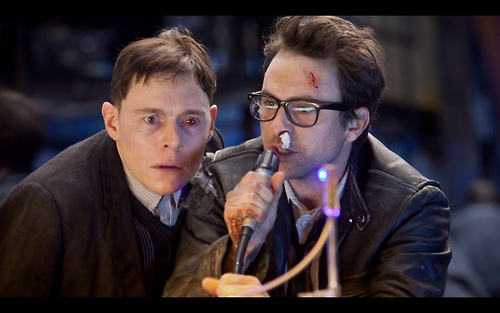 “I TOLD YOU … No Kaiju entrails on my side of the laboratory!”

Beacham contrasts Gottleib and Newt every step of the way because there’s no real story “need” at grass roots level for there to be TWO scientists; certainly had Beacham come to Bang2write with an early draft of Pacific Rim, one of the first notes I might have given could have been, “do we need two scientists? Why not merge these guys?” After all, in a story world of giant robots and monsters and technical mumbo jumbo, our principal concern is not only kicking Kaiju ass, the precedent has already been set by the likes of Bay … Audiences don’t necessarily care about story or character arc, if they have spectacle and bags of it. Not because they’re stupid, but we want to be entertained! We don’t want a goddamn sermon, we wanna kick back and did I mention we’re KICKING KAIJU ASS!?!

But ultimately, PACIFIC RIM gets away with two scientists because of that contrast at grass roots level, as just as importantly, there’s SIMILARITIES between the two men too:

1) In terms of role, the scientists create not just a comic relief function, but also an antagonist function; in other words, they add specifically to the conflict IN the situation. This might be by fighting like children; or it might because despite Gottleib playing by the book, Newt is a Maverick. However as part of their (shared) arc, BOTH men must realise they can only truly help the cause against the Kaiju if they work TOGETHER. MORE: A tale of two psychopaths – more on characterisation and contrast

2) Regarding expositional function, both scientists perform very important story functions. I’m not giving specific spoilers, so let’s say the scientists at different points in the narrative make important realisations that help overcome the world’s Kaiju problem, but crucially, for very different reasons relating to their own scientific AND emotional approaches, whether that’s physics/biology, or playing it by the book versus being brave. MORE: How does exposition work?

3) Both scientists have tragic back stories, yet never speak of this once: we do however SEE that shared experience – albeit only in a FLASH, so quick you might miss it – and so central to them both that we can’t even be sure which glimpse of the boy of the past in each of them is which. But that’s the point of that single moment: it’s what bonds them, even if it set them off on entirely different paths. Did you see it? MORE: How a tragic back story can screw up your character 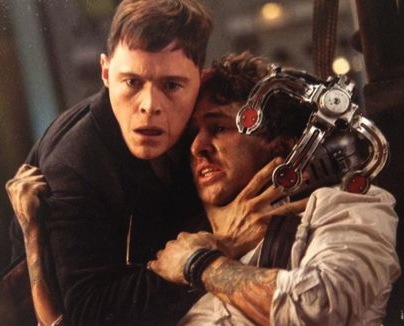 “You owe me a Kaiju brain, you one-eyed BITCH.”

So It’s very easy to say both Gottleib and Newt are “stereotypes” or “tropey” cuz they both draw on the age-old notion of the “mad scientist”. But the crtcs who accuse Gottleib and Newt of being stereotypical are not only underestimating the writing in both characters’ contrast AND similarity (as I’ve outlined in this post); said critics are also misunderstanding the notion of ARCHETYPE. If looking up the definition of “archetype”, you will find:

noun; plural noun: archetypes
1. a very typical example of a certain person or thing.
“he was the archetype of the old-style football club chairman”

Compare the above then, with:

noun; plural noun: stereotypes
1. A widely held but fixed and oversimplified image or idea of a particular type of person or thing.
“the stereotype of the woman as the carer” 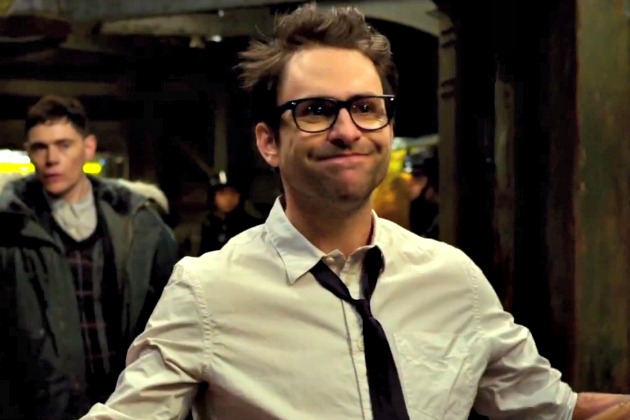 Just by the very nature of the existence of both Gottleib and Newt, we can see the notion of “mad scientist” is NOT fixed here in PACIFIC RIM; neither man is SIMPLIFIED either! Beacham has gone out of his way to ensure both are compared and contrasted. In other words then, whilst they might be TYPICAL, they are not mere “stock characters” (an accusation bandied about by so much movie commentary in fact, it has in itself become a stereotype – LE DUH).

So, whilst the character work in PACIFIC RIM may not be subtle, neither is a film that’s ultimately about Giant Monsters fighting Giant Robots!! On this basis we can see the mad scientist then is an archetype, every bit as much as a hero, villain, love interest or whatever. The words “mad scientist” are melded together, just as much as our two guys are in this movie. The key: Gottleib and Newt are not JUST mad scientists; they have motivations that drive them, even if that’s just trying to outdo each other (spoiler: it’s not), which in turn acts a catalyst for the plot, which is a HELLUVA LOT HARDER THAN IT LOOKS BY THE WAY!

As a last point, it’s not difficult to see why mad scientists turn up in science fiction, either (the clue is in the genre’s name!). Plus our culture insists that the gifted geniuses of our planet, the ones who change the world, the ones who go where others fear to tread in the name of progress, science or saving strangers the world over, will do WHATEVER IT TAKES … And if that means doing something unhinged and dangerous? FINE. Newt even brags something along the lines of:

I’d LOVE to see more action/adventure and Sci Fi spec scripts in the pile with the kind of secondary characters PACIFIC RIM has in spades, but especially Gottleib and Newt. Very often the spec scripts I read in this genre take themselves far too seriously, or try too hard reinventing the wheel, or both … Yet looking at the likes of movies like this, especially since the birth of CGI twentyish years ago, show the larger than life movie has larger than life characters, especially when it comes to comic relief.

Really effective #writing advice from Angie Thomas, author of THE HATE YOU GIVE and ON THE COME UP ❤🔥

Writer: I desperately want to finish my book. More than anything. More than want coffee, or sleep, or love and affection.

Person: shouldn't you working on it then?

Writer, pausing while reorganizing their refrigerator: How dare you ... See MoreSee Less

Miss this, earlier?? >> If you want to be a TV writer, read veteran TV scribe Gina Fattore's top TV #writing tips! Gina has written on such TV classics as DAWSON'S CREEK, GILMORE GIRLS & CALIFORNICATION. Get over to B2W & soak up her writing wisdom NOW ow.ly/vb0r30rfDll ... See MoreSee Less