Slugline/Scene Headings Monster Munch: KILL/EAT EVERYONE… And The Other Stuff 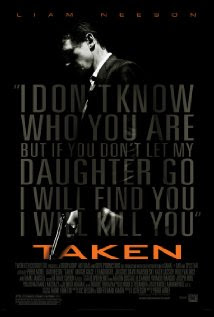 Following last week’s post about Horror Vs. Thriller, long term Bang2writer and all round top fella Ian Noakes had this question for me:

In the movie TAKEN with Liam Neeson, does Liam have any kind of flaw he needs to overcome by the end of the story or doesn’t he change at all? If he does have a flaw, do you see it hindering his mission to find and save his daughter?

It’s very tempting to view genre films as *mere* plot, with little room for characterisation – and this is one of the most oft-cited arguments I see against them. However, I don’t believe there is a single person who has not felt SOMETHING for a character in a genre film and even identified with them, at least once, for whatever reason.

For the record, I love genre films and feel they can present very complex and interesting themes and messages to the masses in ways dramas can’t always. And I make no apologies for enjoying action thrillers, even martials films. I love the fact their sense of audience is often so well defined; they know exactly who they’re targeting and more often than not do it well, as even if the film does not meet expectations on actual viewing, the marketing ensures it gets bums on seats. And even in the LEAST character-driven films (of whatever genre), there has to be *some* “interest” (for want of a better word) to the main character, else there’s little point in the audience watching, as they cannot engage with the journey of that character – which is arguably one of the main points of plot construction, since it’s difficult to have one without the other.

Some action thriller heroes are multi layered, like John McLane of Die Hard or perhaps Jason Bourne (especially taking into account The Bourne Supremacy and his dodgy past). However, more like Poe in Con Air, Bryan is *just* an ordinary guy with extraordinary kickass skills. He’s spent his life protecting his country and he’s cost him a great deal personally, principally his marriage to Ex Leonore and now his relationship with teenage daughter Kim.

And it’s fair to say Bryan has a very dark, negative view of the world – which is unsurprising, given his background. His answer then? To try and control EVERYTHING, including his fledgling relationship with Kim. But of course as anyone with knowledge of a teenager knows, this does not go down well, even though Kim actually wants to have a relationship with her father. There is added conflict when we consider Leonore’s various reactions to Bryan; in almost every scene with him in the First Act, she is chastising him as being out of touch with what Kim needs from her father – which of course Bryan is; he barely knows her.

So like John McClane before him, Bryan was a rubbish husband. But this is not his flaw, because he never makes any proclamations of love or regret to Leonore, who is now remarried to a very successful businessman. This new Husband has made a good stepfather to Kim, which Bryan even makes reference to this via subtext when he turns up at the house, searching for reasons for why Kim was taken (Bryan tells the Husband he has had him checked out and would never have let Kim live with him had Bryan had any *real* doubts as to the Husband’s integrity).

Bryan’s goal is simple and spelt out by one of the posters which accompanies the movie, “I don’t know who you are, but if you don’t let my daughter go, I will find you and I will kill you.” We have no doubt he can do this, even though when the daughter is taken Bryan has very little to go on other than the hysterical screamed observations of Kim over the phone and the heavily accented voice, “Good luck.” Besides his own formidable skills, Bryan has a history of service and the various allies and favours he can call in. We know he will find Kim and rescue her and kill every single person involved and who gets in his way, without a second thought. Bryan is completely ruthless.

And Bryan’s belief the world is a dark, terrible place is of course justified (otherwise there would be no movie) – so that is not his flaw either. He believes his daughter is far too naive to go out into the world alone, even with an older friend like Amanda – and he’s right about that too, for the moment she does, she is quite literally taken. This is also backed up by the fact the singer Bryan is protecting at the beginning of the movie is attacked by the man with the knife at the concert arena. TAKEN tells us women are in danger every single time they go out into the world.

We already know Bryan is more than capable and we know he was a rubbish husband and father: but Leonore asks HIM, not the police, not his friends, to bring Kim back to her. Taken is essentially a story of redemption of a father’s love. Bryan has not been *there* for Kim her whole life, no matter the fact he’s tried to make it to all her birthday parties. One day a year does not a father make. TAKEN asks us to believe that parenthood is about protection – and Bryan will go to the ends of the Earth (or at least France) to ensure his little girl is returned to her rightful position in her life, instead of sold into slavery. If you wanted to boil it down, it could be argued the premise of TAKEN is thus:

What WOULDN’T you do to ensure your kids are safe?

As far as Bryan is concerned, he’d threaten, maim, torture, murder and even shoot/hold a gun to the head of an INNOCENT woman’s head (the wife of his French contact). But we forgive him these horrible transgressions and cheer his kicking arse because we know there is a “good” reason for his behaviour. We WANT him to succeed.

So what is Bryan’s flaw?

He wanted to control Kim. If you recall, at the beginning of the film Bryan gives her a karaoke machine and later is given a card for singing lessons by the megastar he saved from the knife-wielding maniac at the arena. When Kim comes to visit Bryan at the cafe with Leonore then to ask about going to France, he tells her she can’t go – but he has something far more exciting for her to do. Before he can tell Kim what it is, Kim tells Bryan there is nothing else she wants to do and runs out. Leonore is angry not only because Bryan won’t comply, but because she sees him as being rigid for rigid’s sake; when he does back down, instead of being gracious, Leonore instead says, “Wouldn’t it have been easier to sign the permission papers?” (or words to that effect). Later at the airport Bryan discovers Kim has lied about her real intentions for the trip and Leonore admits she knew and agreed not to tell him, because Kim does not feel she can be honest with her father.

However, once Bryan has rescued Kim, their relationship changes: Kim says wide-eyed, “You came for me”, suggesting perhaps she can now have faith in the father she had previously seen as paranoid and a bit of a hindrance. At the end of the movie Brian takes his daughter to the singer for singing lessons, fulfilling his daughter’s latent childhood dream, which for me says he now accepts his daughter’s right to be her own person and to have her own dreams… Suggesting that perhaps he will believe in her more and maybe even allow her to go out into the world now, despite her previous ordeal.

CONCLUDING: Yes, I do believe Bryan’s need to control his daughter is his flaw to be overcome in TAKEN and I think it helps his mission in getting her back, as it motivates him to redeem himself to her and thus be the father he should have been.

ON THIS BLOG BEFORE:

Genre Films: Don’t Overthink It (a look at CON AIR)

Read more about genre on The Required Reading List