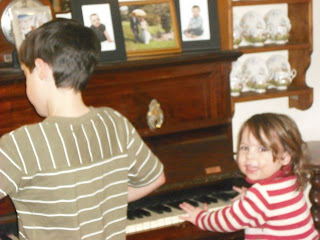 This post is for StrawLaneScott, who asked on Twitter for advice on writing when you have kids in the house to look after at the same time.

I was a parent long before I was a writer or script editor; having a child in your teens before you have even gone to university, never mind started your career, means you have to be able to time manage.

Yet there appears to be this feeling one has a baby, then you wait for it to get old enough to go to nursery or school, THEN you get started on whatever it is *you* want to do. And of course this works for some people – and if you WANT to wait until your child is old enough to go to school before starting your writing career (or whatever it is you want to do), then that’s absolutely what you should do; there are no value judgements here on what is “best”. Combining parenthood and careers is most definitely one of those things completely up to the individuals involved.

However, if like me you would feel frustrated at *having* to wait the three or four years before your child starts school, there isn’t a reason in the world you can’t get started RIGHT NOW. I have created a a script reading business, a whole portfolio of scripts, got an agent, got meetings and worked on various projects like The London Screenwriters Festival and Deviation, all while looking after children at the same time. And no, I haven’t had oodles of childcare either – 2010 was probably one of my busiest years to date, yet my daughter only went to nursery three MORNINGS a week and I had NO RELATIVES helping me out either, as I live far away from them.

I’m not superwoman, nor am I unique: I know loads of other writers and media professionals juggling their work and their children in exactly the same way. It’s all down to two things – good time management and strategies.

First, I’m going to look at how it’s possible to write a spec – or many specs if you want! – whilst looking after kids. Many Bang2writers have told me over the years they feel guilty writing specs while their children watch Cbeebies. Others say it’s difficult staying up late to write when they’ve been hassled by the children all day, their brains are in the “wrong place”; others say they want to get up early in the mornings to write before the children get up, but find there’s always *something* that gets in the way: an ill spouse, a leaking washing machine, a pile of dog sick or that ironing pile that just gets BIGGER AND BIGGER.

But I say you don’t **have** to make your children watch acres of television, ignore household chores, stay up late or get up early to write. I don’t do any of these things when writing specs – yet have still managed to write plenty of them. Lots of people express disbelief at this and think I must be lying; that secretly I’ve had the Wee Girl watch 100 hours of television a week and I’m beavering away at 3am every morning whilst ironing at the same time. But I’m really not. So how can it be done?

By breaking your shackles to the keyboard. I’ve witnessed, countless times, people spending all their available writing time sitting at their PC screen. This is the worst thing you can do when it comes to good time management: for one thing, there’s a strong chance you will end up on social networks instead and while away your time very easily. Secondly, even if your docs are open, you may just end up cutting and moving chunks of your script around – or even worse, simply rewrite the sections you’ve already done (and thus put your finishing date further and further away in the future). Instead, the time savvy writer who has not much time to actually write will SHUT DOWN THEIR COMPUTER. That’s right. They will NOT sit at the PC when coming up with new ideas or solutions for the problem they are currently having with the script. Instead they will take the dog for a walk if it needs walking; do the ironing; take their kid to their park – maybe all three. In other words, they will do REAL LIFE STUFF and let those fictional things come to a natural conclusion in their own head (they should always carry a notebook for a Eureka! moments, of course). Remember: this is SPEC – there is no deadline, other than your own rising feeling of panic at the thought of *not* getting the project done. So stop panicking. Do the real life stuff that needs doing, get away from the keyboard. You’d be surprised at how quickly it all comes together – as I always say, “A writer’s best writing is done by thinking.”

By experiencing real life with your kid. Congratulations, there is a child in your house. You hopefully wanted one in the first place but even if you didn’t, children are an absolute GIFT to the writer: their view of life is completely different to an adult’s and if you pay close attention, you can share in that view. This can feed into your writing, big time. By knowing life is different for everyone, you won’t be writing your own story all the time; you will also hear how children talk and represent them better on the page, which will hopefully have the knock-on effect of differentiating other adult characters too. But beyond all that, by getting OUT THERE in the world with your child, you will see other things that can also help writing in the long term. Lots of people often say to me & my children have a weird way of seeing or finding “weird things” like the snake in the hedge, but in reality, lots of other people probably walked right past that hedge and never saw the snake. Why? Because they were probably so focused on their own lives, their own problems, their own work or where they needed to get to, etc. If you have a child with you, you can usually go at more leisurely pace (provided it’s not the school run, of course) and there are more opportunities to see the more random, screwy side of life. Just recently the Wee Girl and I saw a chap in a suit on a skateboard, with a small dog tucked under one arm. True story. Like kids, you have to learn to really LOOK.

By having a writing strategy. Here’s mine: write a one page pitch doc and iron out roughly where the story is going; write a longer synopsis or beat sheet. For the actual screenplay, write as many pages as you can every day – but never more than ten; NEVER look back at the previous pages, JUST KEEP GOING. Rinse, repeat until finished. Then, read it all through. It will of course be mostly pants, but there will be some good stuff in there. Do a rewrite on the same basis – as many pages as possible, but never more than ten, etc. Get notes for the third or fourth version, then do the same again… and so on. “BUT BUT…!” You say, “This is where the kid has to watch loads of Cbeebies, right? This is where the ironing doesn’t get done or the dog doesn’t get walked?!!!” No, actually and all because of this:

Small children like routines – and if you stick to them military-style and are consistent, those small children will let you write. It’s 100% honest to God true. I know there are children who have learning disabilities who may not be so accommodating (with very good reason), but the average child will be willing to cut you a deal, even if they’re not old enough to know what the word “negotiation” means.

An example: when the Male Spawn was at primary school, I would walk him the twenty minutes there, with the Wee Girl in the pushchair; that’s a forty minute round trip, which took in town on the way back. On that basis then, I would run any errands for the day first – like going to the post office, picking up milk, buying anything else, etc. So by the time I reached home it was usually approximately half 9 and it was time for Balamory. Wee Girl would then clamber out of her pushchair and watch approximately one hour of Cbeebies. During this time I’d ignore all email and go straight to my script pages and do as much as I could. Wee Girl would burst into the kitchen at approximately half ten and then I’d take her to the park for an hour. We’d be back for approximately midday and Wee Girl would sleep for 1.5 hours. I’d do more pages. She’d wake up in time for lunch and after I’d unloaded the washing machine, etc then we’d play or do some painting or baking, before it would be time to pick up the Male Spawn from school again. After school is when ironing and other chores would get done, usually while both children played with next door’s children while their mother was doing the same as me.

It was not easy to implement this routine; Wee Girl is wilful and like most children, wants her own way. However with much tweaking and negotiating, this system worked for us for a very long time – and all days where she wasn’t at nursery became like this, more or less. I also introduced more things to do, as I became bored of going to the park – I started taking her to musical class Jo Jingles for instance, to Storytime at the local library or to “Stay and Play” at the local children’s centre. The end goal was always the same: tire her out, GET HOME AND WRITE LIKE THE WIND.

NEXT: Working for actual money and/or a specific deadline or end result when there are children in the house to look after, a whole different ball game…