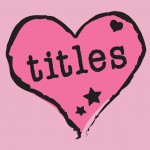 Titles are a reader’s and audience’s first port of call. Your title needs to be catchy and it needs to say *something* about the film and/or character at the heart of it. Pick a crap title and you put people off. Sorry to be blunt – actually I’m not sorry at all, it’s true. We all make assumptions based on title! So here’s my run-down of what makes a good title… Enjoy.

Yes might seem obvious, but there’s a lot of genre scripts that sound like dramas and vice versa in that spec pile!

i) **General** rule of thumb – a first name as a title screams DRAMA or dramedy, ie. Juno. Obvious exception to the rule? Crime scripts titled with the surname of the protagonist who is usually a policeman (esp TV): ie. Luther, Taggart. Other general drama refs would be first person in the title, ie. My Summer of Love, My House in Umbria or place/country names: Munich, Australia. Sometimes dramas will have a lengthy title like Alice Doesn’t Live Here Anymore, but this seems less now and I certainly can’t remember the last time I saw such a long title for a drama in the spec pile.

ii) Genre features in particular need to be catchy but NOT TOO CLEVER. Think of all the best horror titles: they do exactly what they say on the tin, ie. Alien (originally called Starbeast!! 100% true), Predator, Jaws. Same with thrillers: Se7en (about the seven sins); Panic Room (they’re trapped in a panic room); Red Eye (it’s on the red eye flight to Miami), etc etc. Action-Adventures often describe exactly what’s in them: The Running Man, The Core, Under Siege, Deep Impact. Comedies and Rom-Coms often describe the people in them (Ghostbusters, The Wedding Crashers, The Yes Man) or the situation (Just Friends, The Proposal, Meet The Parents etc.) You catch my drift. One or two words should do usually do it – personally I’m a big fan of the one word title for genre movies.

2) Naming it after the setting/job is good for TV, not so great for film

Titles like Eastenders, Coronation Street, Doctors, Casualty, etc works really well in TV and you’d do well to take a leaf out of TV Bosses’ books if you’re writing a soap or precinct drama. But for film? Doesn’t really feel *vital* enough, Arlington Road strikes me as a bad title for a film about terrorism, for example – I recall getting it out on video way back and being really surprised. Better to go for 1a) or b) I’d say (dependant on what it is). Sometimes movies are named after job titles like TV scripts , but I’m struggling to think of one atm.

3) Don’t use a song lyric/title

Please, please stop. Over the years I’ve had all kinds of lyrics from songs and they rarely work, usually because the scribe involved has picked something really obscure. Worst of all are the scripts that keep going back to said lyrics as if they reveal something about the plot, but being so obscure, they just can’t. Better to write your OWN song that fits in with your plot — a Ruth Rendell mystery did this really well with Some Lie And Some Die. Sure, sometimes song TITLES work – Sweet Home Alabama leaps out at me – but 9/10, if you haven’t used an OBSCURE one, it just means there’s YET ANOTHER script doing the rounds with the same title. YAWN. Biggest offenders? Teenage Kicks by a country mile, but also In The Name Of Love, a few times Karma Chameleon and just recently I’ve had a minor outbreak of As My Guitar Gently Weeps. I even got a I’d Do Anything For Love (But I Won’t Do That) once!!! WTF.

4) If using a well-known phrase/specifc word, Google it!!!

I wrote a script called WISH, but no one liked that title so I changed it to CRY WOLF. Then I discovered not only was that a song by A-Ha (hardly the audience I was going for), there was a movie by the same title starring JON BON JOVI ffs. So I changed it to Eclipse. Oh, alas, the bloody Twilight movies come out a couple of years later. Le Sigh. That script is destined to be title-less, I swear. Hey ho. For those still interested in this section, the title ALONE seems to be one I see most regularly on spec scripts and anything containing the word “blood” — ie. BLOOD TIES, BLOOD RIGHT, BLOODLINE, etc. Other spec titles that crop up lots randomly are HAPPY NEW YEAR, HAPPY BIRTHDAY, DADDY, FATHER’S DAY, DEAR MUM or DEAR DAD.

Sometimes a good title can stand a certain amount of intrigue, but you need to choose really wisely. The one that sticks out at me here is Eternal Sunshine Of The Spotless Mind. I think this is a brilliant title, because it’s obscure enough to give us a flavour of the film, but intriguing enough without being up its own arse. The title comes from Alexander Pope’s poem, Eloisa to Abelard. Note: songs are not a good source, everyone is doing it. Also, here there’s always the chance you WILL come off as a pompous ass, far better to go for 6).

6) If you want a fancy title, be prepared to really go for it

Things To Do In Denver When You’re Dead and To Wong Foo, Thanks For Everything, Julie Newmar immediately spring to mind. One script I saw floating about one year – I don’t recall if I read it or merely saw it on a website, mind – had the title EVERY TIME I GO TO STATEN ISLAND SOMETHING BAD HAPPENS. That type of mad title would make me want to read the script, but beware: I’d be expecting at least a black comedy. NOTE: Don’t make it a song lyric, as above.

Most importantly of all, don’t get hung up on your title. 9/10 you will have to change it as the piece evolves – and sticking with it *no matter what* can hurt your ability to do this. For instance, I had a conversation about my woman-in-peril script, originally called RUN, that actually went like this:

AGENT: Does she have to run? Couldn’t she just stay… couldn’t the action in the resolution be contained?

AGENT: Well, couldn’t you change the title as well?

Once he actually said that, I suddenly realised I’d been letting my title – a pretty crap one at that – get in the way of fixing the issue in the resolution. It was like a million lightbulbs turned on in my head.

And guess what – if you go through all that and are lucky enough to get optioned AND your piece produced?

I bet **they** change your title anyway.