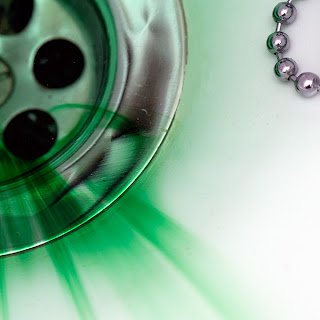 As writers, we’re warned a lot that we can get “blocked” at any time, like there are plugholes inside our brains that can get clogged with the neccessary debris of life like chunks of smelly hair down the drain. People email me and complain there is blank space inside their brain, or that kids and spouses, lack of money, holidays or housework all get in the way; sometimes, they’re simply haunted by ideas they “just can’t” get on paper.

Some people don’t believe in Writer’s Block. For the record, I have no real opinion; I don’t suffer from it per se, though I am known to claim I have it when I really have a hangover. This definition is quite good: linking Writer’s Block to depression and anxiety (cheery), there are all the usual strategies and even a list of dramatic depictions of actors playing writers with writer’s block, so one does not feel alone. Thanks.

Doesn’t quite cut it for me, though. I don’t believe any amount of new experiences, listening to others’ or relaxing breathing does a damn thing when panic sets in. ‘Cos that’s what it is. Writer’s block is the stage where pressure begins to build up, either because you personally feel you haven’t done enough (either with your life or your script or when it’s really bad, BOTH) or because some git’s scaring the heebie-jeebies out of you by phoning and yelling “Get that emailed to me next week or ELSE!” whether it’s a producer, publisher or friend who thinks they’re “encouraging” you.

I often use music when writing and to give myself ideas. Interpretation is key to writing in my book. I believe in the idea of re/presentation, in that you literally re-present your view of the worldand everything in it each time you create fiction. This does not mean I am the sadistic murderers or werewolves I write about though, it goes deeper than that! For example, I’m very concerned about false personas: I hate it when people are nice to my face but talk behind my back. It’s no accident then a lot of my protagonists share this same concern, or my antagonists are not who they seem or are wolves in sheep’s clothing quite literally.

Knowing what you present to the world can only help your writing. Freud talks a lot about the notion of “repetition compulsion” and I have found on a number of occasions I have written essentially the same scene or character in different screenplays. Not good. Knowing it’s possible to do this = very good, since I cut out that scene or character before anyone saw it. Also, by knowing what your concerns are, you know at least one of the potential audience’s. Seems obvious, but if it appeals to you, then it’s bound to appeal to a couple of hundred thousand others…if you pitch it right. The latter part is of course hard, but you can take confidence in the former and use it to get over your block, since part of it is essentially that little voice in the back of your mind telling you you’re crap.

Also, instead of railing against the neccessary debris of life, embrace it and you’ll find it can form part of your writing style and even your narrative. Writing is one of the rare jobs where you don’t actually have to be writing to still be working. I’ve had some of my best ideas whilst cleaning the bathroom or ironing. I’ve figured out some of my most irritating structural problems when changing the baby or making dinner. Sometimes sitting at a PC is not the answer. You think you’re working at your script, but you’re not. Turn it off. Walk away. Keep thinking, but walk away. I’ll bet you you’ll be back in a few hours with the solution.

You know that old mantra “write what you know”, right? Use this to your advantage. This does not mean writing about your life as an insurance salesman when really you want to write a sci-fi thriller, far from it. Rather,look at those familiar things from another angle. I like to do this with music. Prince is a particular favourite of mine as he has literally written a song for just about every occasion and a lot of them have very clear characters and structure. Raspberry Beret, Little Red Corvette, I Could Never Take The Place Of Your Man and Nothing Compares To You might be the most obvious, but those from his own films like the classic Purple Rain, Joy In Repetition (from Graffiti Bridge) and Girls And Boys (from Under The Cherry Moon) can all form the basis of inspiration too. Just thinking creatively can shift your perspective, but you could also write these songs (or indeed any others! It doesn’t have to be Prince, use whoever works for you) as short films as an exercise or even plot them on a diagram like Syd Field’s Paradigm if you felt you needed an extra “kick start”. In addition, you could take favourite lines from said songs above or films and books: write them on a white piece of paper and do a spidergram around them, creating characters, locations, scenarios. Alternatively, use the lines to start off a conversation between two unknown people and see where it takes you. In creative writing classes I’ve used these with students, all with good results:

“Don’t be a fool! He’s got a gun. The bastard’s psychotic, you only have to look at him.” (WITHNAIL AND I)

“She spoke in such a dead, zombie-like manner that Amelia got the shivers.” (Anna Smith, NO BONES)

HARRY: It’s good to see you, Rollo.
MARTINS: I was at your funeral. (THIRD MAN)

Also, never underestimate the power of connotation. No one in the world views words in exactly the same way you do. It doesn’t matter if you use the same song as someone else – chances are, you’ll come up with a different film if you chose to write it as one. If you have a writing partner, use the same song or same words on purpose and compare notes. You could produce an entirely different narrative as a result. Just because you start out with something similar to something that already exists, does not mean it will stay that way. With development and redrafting, stories evolve…They can’t not, it’s is the nature of the beast.

So, when it comes to Writer’s Block, first off – don’t panic. Don’t have anyone tell you it doesn’t exist: if you’re feeling it, it evidently does. However, do not let it be your master and you its bee-atch. Attack it, chip away at it. There is more than blank space in your brain, even if all you can think about is the fact the spare bedroom needs painting. So paint it. Listen to some music. Tell your spouse you’re having problems with your protagonist/arena/structure and ask them if they have any ideas. Chances are, their ideas (especially if they’re not a writer) will be plagiarised from every TV drama or film going but that’s cool, ‘cos they’re giving you an insight into what has gone before. Write random phrases down if you have absolutely nothing, see where they take you.

And don’t panic. Did I mention that??

I told myself aged 13 I would be a published author by the age of 25. Hah. I have 35,000 words of a crap book languishing on my desktop and my latest effort has ground to a halt in the last two weeks! But that doesn’t mean I’m a failure, it means I got side-tracked by the neccessary debris of life. Happens to everyone. What doesn’t happen to everyone is the idea of letting themselves off the hook. So do that. Suddenly, you can breathe and you can write again.

Any other suggestions on beating lack of confidence or The Dreaded Block?